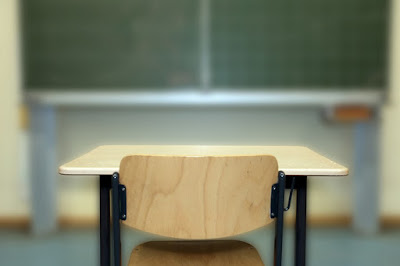 My oldest child has a criminal record that begins when she was in kindergarten.

That's the first time we received a letter from her school, informing us that she was habitually truant and in violation of California Education Code 48260.

According to the principal, who signed the notice, her attendance was so deficient that if we "continued to fail to meet (our) obligation, (we) would be guilty of an infraction of the law, and subject to prosecution pursuant to Education Code 48290-48296."

Then, she levied the following shocking allegation.

So egregious we posed her for a mug shot. 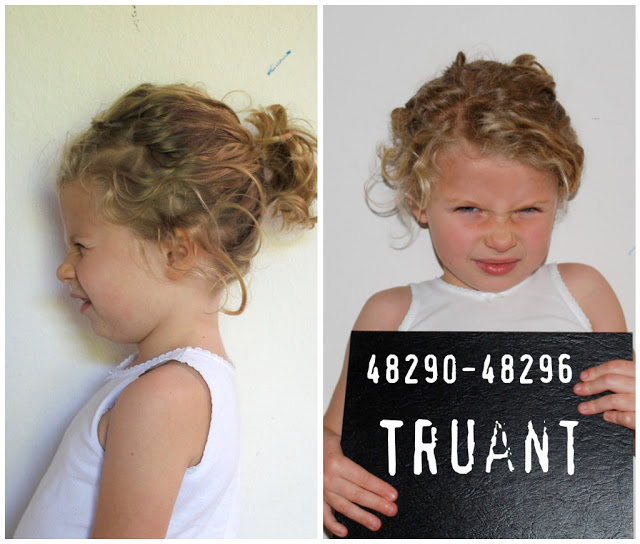 That kindergartner is now graduating from 8th grade. She's too old to pose in a wife beater with a placard (5 is such a precious age!), but I'm pleased to say we have come a long way. In kindergarten, she had 5 unexcused absences. This year, she had 29. 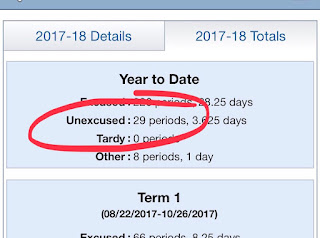 In the past nine years it seems, we have progressed through the seven stages of truancy. They range from shock, shame and guilt, through questioning and resistance, to planning a seven-day trip to Disneyland in the middle of October.

When we lived in Virginia, where she attended 1st through 6th grade, absences were reported to a voicemail that required parents to specify their child's ailment from a list of options that included fever, vomiting, rash, diarrhea and sore throat. My kids always begged me to make this call on speaker. Evidently there's something about hearing the school secretary say "diarrhea" that just never gets old.

Once, when I called and honestly reported that she had a "stomach bug," I received a call back a few hours later, requesting more specific details. This struck me as so intrusive that I reacted defensively by giving the information they requested, and then some. I think it was the point when I offered to provide a stool sample that they marked her excused and ended the call.

Last year, the Washington Post published a list of acceptable reasons for a child to miss school. It included strep throat, influenza, pink eye and hand foot and mouth disease (which, by the way, included the caveat, "especially if they are unable to control their drooling." Gee, you think?).

Our family also has a list of acceptable reasons to miss school. Over the years it has included visiting Gettysburg, the Grand Canyon and Statue of Liberty, solar eclipses, weddings, mission farewells, visits to grandparents, the beach, Disneyland, and their mother's PMS.

Before proceeding, I must clarify that this post is a confessional, and not an advocate. I completely understand the reasoning behind truancy codes, and importance of consistent attendance. Absences create an undue burden on teachers, who are my HEROES, and require them to invest time and attention that diverts from other important aspects of their job. Also, it is my understanding that most schools are funded using a formula that incorporates average daily attendance, so that absences mean fewer dollars allocated.

But. Watching my daughter turn from a kindergartner to a freshman faster than I can say "habitually truant" has also taught me that childhood is crushingly fleeting. The joy and heartbreak of watching her and her siblings grow and gain independence has prompted me to adopt a "What will we remember more?" approach to raising them. Whenever the option of a second-grade history lesson or day at a museum presented itself, the museum always won. And when we've had opportunities to take vacations that create memories beyond recess and worksheets, we've taken them, even when they haven't fit within the confines of winter break or early release days.

Also, when they are in school (which is the majority of the time!), I make a concerted effort to compensate. I love their teachers exceedingly, and shower them with gratitude. I'm the first to volunteer to assist, and provide classroom supplies, cupcakes for parties, and children who are prepared, respectful, smell good, brush their teeth, and never tattle.

Which is why, at the beginning of this school year, when mothers I follow on social media were posting their inspiring annual family mottos I decided that we need one too, and selected after much consideration, "Erbs have Unexcused Absences."

It may have been deprecating at first, but as the year has progressed it has evolved from evoking feelings of sarcasm to sentimentality. Jolie is on the precipice of high school, and with the pressure of college acceptance on the horizon I know that soon we'll no longer have the luxury of of compensating for absences with a simple stack of makeup work. In four years she will be out of the house, and when she is I know I won't regret a single call to the absence voicemail to excuse her to spend extra time with us.  She missed 29 days this year but is ending it with a 4.0, which makes me proud, and an accumulation of family memories, which makes me prouder.

Earlier this year, after back to back trips to California, Arizona and Idaho, her younger brother came home from school one day to tell us that a boy in his class had never missed a day of school. "Not one in his whole life Mom," he said, "Not even since kindergarten. That's called perfect attendance."