The girls started school last week, and Cal begin preschool this week. We are officially settled into the routine of fall, which gives me an opportunity to catch my breath and reflect on summer.

It was a busy and happy couple of months, in which we stayed up way past our bedtimes. Jack & I repainted the family and living rooms, hung curtains, and replaced light fixtures. The kids swam, completed the summer reading program, and discovered Legos.

Starting with this one - 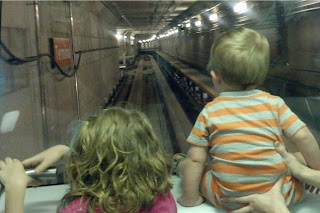 This is the first picture I took on our way out of town, of Eddie leading the Dulles aerotrain toward our flight.

And this is the last picture I took, a month later, of Cal leading it back home. 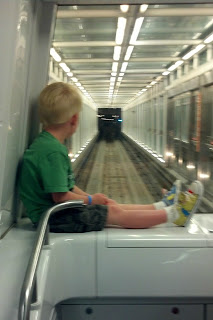 The images are nearly identical, but they evoke very different memories. The first is exciting, and conjures the thrill of anticipating all the fun ahead. The second shot feels heavier, a combination of fatigue from a journey that ended at 2:00 in the morning, and the feeling we left our hearts behind.

About halfway through our flight home Cal said, "Mom, can we ask the pilot to turn around and go back?" I told him we couldn't, but what we can do is count our blessings for the memories we made while we were there.

Here are a few of my favorite -

Our first stop was a stay in Prescott, Arizona, with Jack's family. My parents taught me that nothing beats a cabin vacation, and this was no exception to the rule. The weather and trees were beautiful. We visited on the porch, played games, assembled puzzles, ate buckets of peanut M&Ms, and gathered around the TV to watch Nik Wallenda tightrope across the Grand Canyon.

Everyone thoroughly enjoyed our stay there, unless of course you consider the animals that dared cross the paths of Cal, his Uncle Todd, and their BB guns.

Cal ranks his Uncle Todd in the same category as Batman and Buzz Lightyear, and his hero worship was forever sealed when he presented him with his own gun and taught him how to use it. He took careful notes of the wisdom Todd imparted, which included things like, "Never shoot pretty birds Cal, only the ugly ones. That's called natural selection." 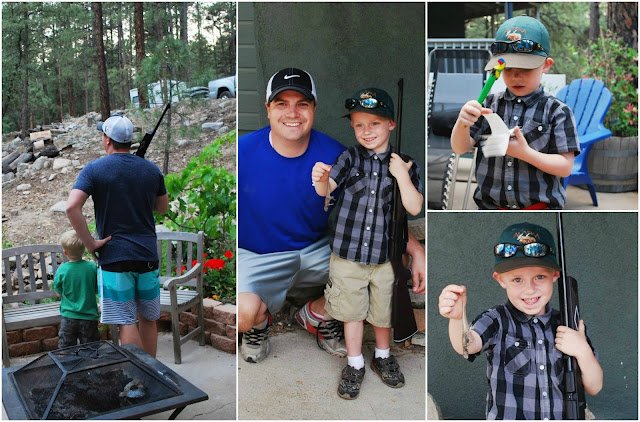 Prescott was also home to the 19 firefighters who were killed by the Yarnell wildfire the day after we left Arizona.

When we arrived in Utah, we baked our best cookie recipes, boxed them up, and delivered them to Station 55 in West Jordan. The kids presented them to the firefighters and thanked them for their service.  I can't say the visit was entirely charitable, because just as they were enjoying the cookies and presence of our adorable children, we asked if they would be willing to stop by our 4th of July party and hose down the guests. They said yes!

The fourth arrived and over 100 friends and neighbors were gathered, most of them children, all of them anxiously awaiting the truck. When it finally pulled up the street it was greeted with a hero's welcome. Posters! Cheers! Chants of "Station 55! Station 55! Station 55!" 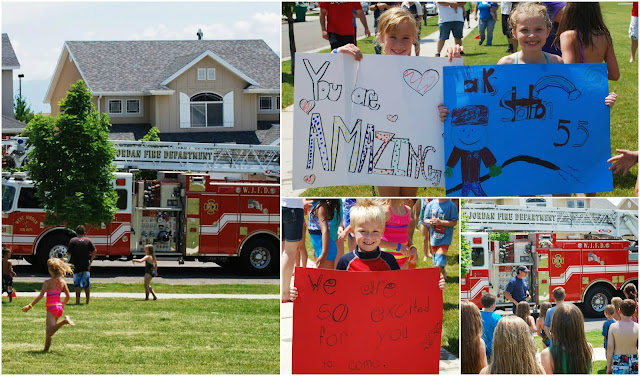 Less than a minute after getting out of the truck, the firefighters turned around, jumped back in, and drove away with lights flashing. Turns out they had received a call. Cal's face says it all. 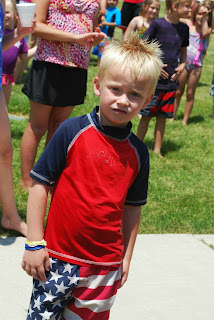 Alas, about a half hour later, another truck arrived from neighboring Station 53. The kids were overjoyed, and we were touched that the task had been considered critical enough to call in backup. God bless America. 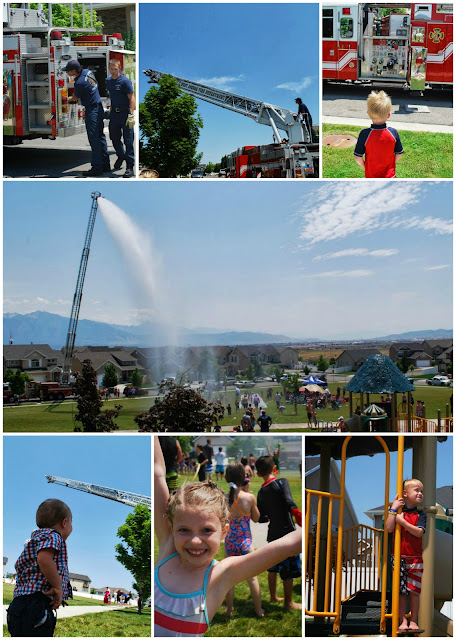 Speaking of God blessing America, this was our fifth 4th of July spent at Jane's house and my Mom's, and I declare my independence from ever celebrating elsewhere! Slip and slide, bounce house, barbecue, friends, family and fireworks. I pledge allegiance to the Maples.

It's also worth mentioning that Jack grew his annual vacation beard, and put it to good use by hiking Mount Timpanogas with the brothers in law, playing football, and going about town looking handsome. 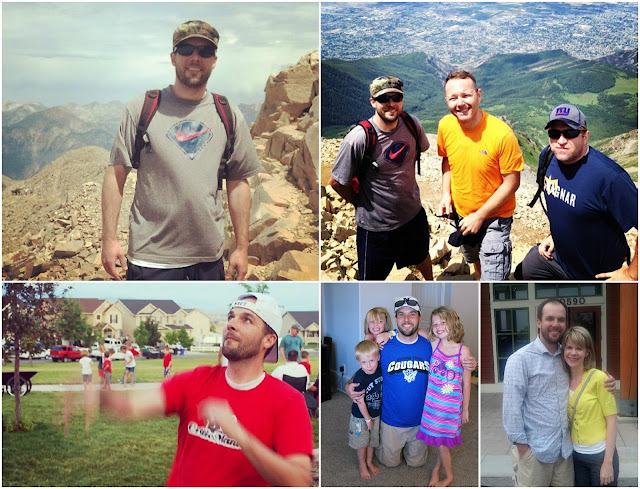 I will let the cousin pictures speak for themselves. How I love these kids, and how they love each other. 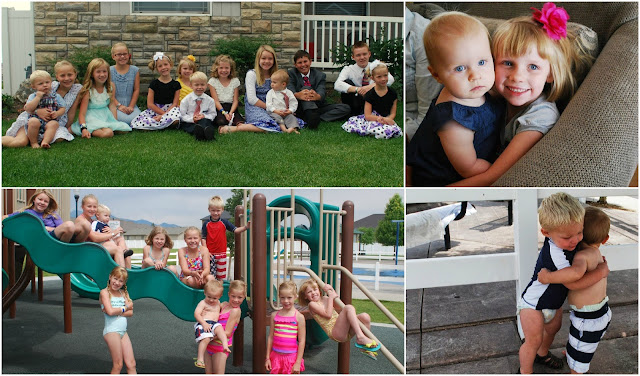 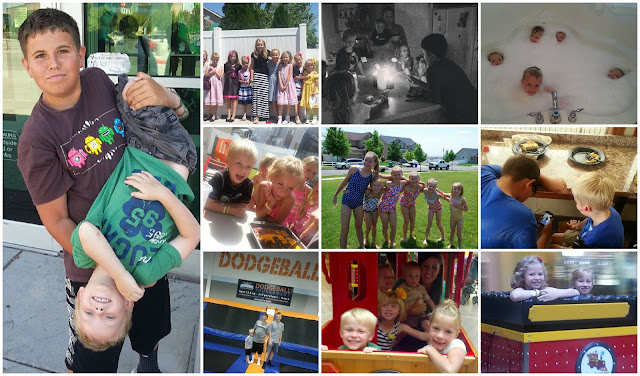 most of the time

I wish I had grandparent pictures to also speak for themselves, but I failed to take any. I think because each time they were being spoiled by their Grandma Susan, Grandpa Jack or Grandma D, I was off enjoying the free time it allowed me.

Daneille taught the kids to play Uno at the cabin, and spent hours (hours!) in tournaments with them. She never turned down an invitation to play. Grandpa Jack would whisk them away for adventures. They would disappear for an entire afternoon and come home showing off Happy Meal toys and movie ticket stubs. Grandma Susan unveiled the newest version of GrandmaMall, which upped the ante from tickets to actual cash. When a grandchild earned their share, she would take them out for frozen yogurt and the store of their choice to spend on whatever they wished.

By the end of our trip, I don't think there was anywhere in Utah Jolie couldn't gain admission. 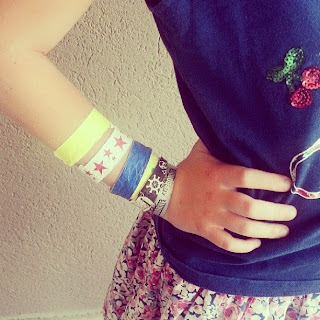 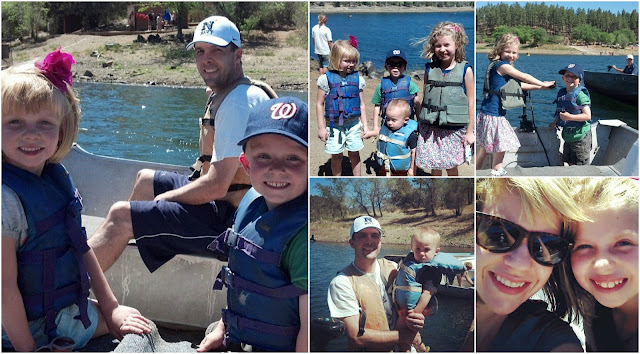 I actually really enjoy flying with the kids. I credit Jack, and his longstanding family policy that we arrive at the airport two and a half hours before takeoff. I thought it was extreme at first, but have come to appreciate the way it eliminates stress, and recommend everyone with kids do the same. We have a relaxing check-in, eat a leisurely  dinner, and let the kids go hog wild on the people mover so that by the time we board the flight everyone is ready to sit and rest. 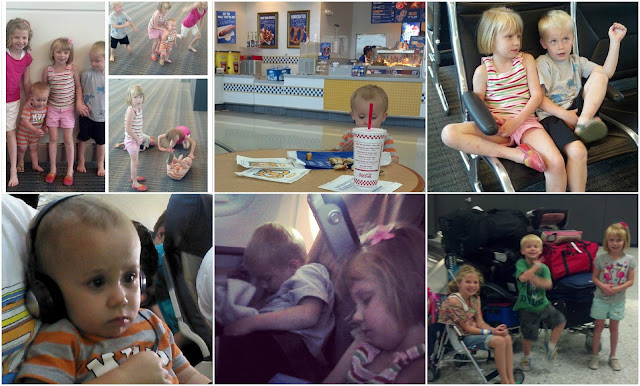 It also allows us time to make small talk with Reverend Jesse Jackson, who walked into the bathroom behind Jack and the kids at Chicago Midway. 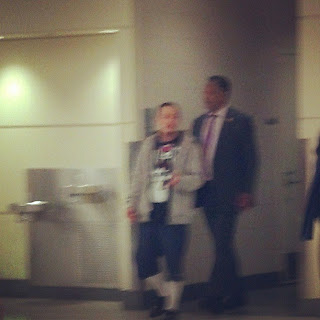 My sister Jane however, does. The sneaky airport picture that steals my heart is this one, which she took after she and my mom said goodbye in Salt Lake. 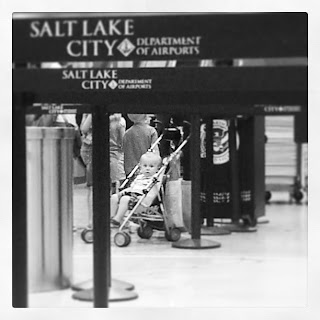 Jane has a talent for photographing from the most interesting angles. This one is so artsy I think it leaves room for multiple interpretation - At first glance you look at the boy and feel pity, because he is so sad to leave his extended family behind. But on closer inspection you realize he is actually a boy to envy, because he is so lucky to have them.