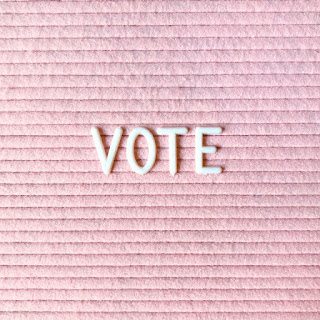 It's student government election season at my daughter's middle school. Because no proper American campaign is without a good controversy, I always find myself instinctively trying to sniff one out - even if it is among ninth grade candidates whose chances hinge on how much glitter they use in their cafeteria posters.

In the case of this campaign however, controversy presented itself without any effort at all.

The election process began a couple weeks ago, when all interested students were encouraged to fill out an application that included teacher recommendations and questions about their qualifications. Next, each applicant was interviewed by two teachers and asked to role play scenarios that included, for instance, how they might help a new student feel welcome on campus.

Of the applicants, these teachers were tasked with selecting four finalists to appear on the ballot, two of which would then be elected officers by popular vote of the student body.

On the day the applicants were notified who had been selected, I happened to be on campus. It was after school, and an administrator announced over the loudspeaker that anyone who applied for student government should report for the results. Always a sucker for breaking news, I followed a few of them to watch. I should note here that my daughter was not among the applicants, so I was able to observe what happened next from a pretty objective standpoint.

Thirty students had applied. As they entered the room they were each given a sealed envelope that revealed whether they had been selected or not. Four emerged with congratulation letters. All of them boys. Every girl - and the majority of applicants were girls - was rejected. Smart girls. Kind girls. Well-liked girls. National Junior Honor Society girls. All of whom will be casting votes next week on a boys-only ticket.

I tried so hard not to let this bother me. I really did. I went through all kinds of justifications in my mind, about how the deciding teachers must have known more than I did, or maybe the boys really were more qualified than the girls. I reminded myself that I wasn't a fan of gender politics anyway.

In the end however, I couldn't shake the feeling that a mistake had been made, and wrote the following letter to the principal.

I'm the parent of a 9th grader and am writing, first, to express my appreciation for efforts that have been made at (--) Middle School to encourage female students. I applaud your decision to participate in SheTech, and display empowering messages throughout campus. It has been wonderful to have a female principal who serves as such a positive role model for girls of confidence, leadership, and what is possible.

I also wanted to respectfully convey my disappointment upon hearing that only boys were chosen to appear on the student government ballot this year. I worry that in denying female representation, you have missed a great opportunity to send an encouraging message to all of your female students, whether they have political ambitions or not.

As you're aware, women are decidedly underrepresented in politics at both the local and national levels. When they do run for office, they are just as likely as men to win their elections. The reason they are so underrepresented is because they are far less likely to run in the first place. Two of the most frequently cited explanations for this are the fact that females are less likely than their male counterparts to be encouraged to run, and that they are less likely to consider themselves capable of doing so.

It takes a lot of courage for girls in middle school to decide to run for student office. Presenting them with a boys-only ballot could perpetuate their self doubt, and make them less likely to consider it as an option for themselves. It's discouraging enough when boys self-select more frequently than girls, but particularly disheartening when teachers are the ones who have done the selecting.

I hope that in the future, you will consider ensuring that those who oversee this process take advantage of the opportunity to empower young girls to perceive themselves as capable of campaigning and holding leadership positions on campus.  So often what happens in school can shape what happens in real life. 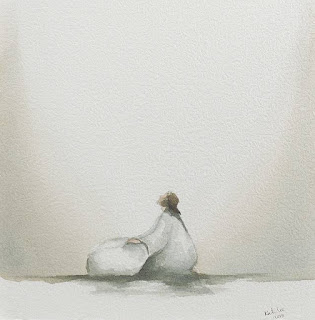 
My Dad didn't speak Spanish, but that never stopped him.

He was convinced that the Portuguese he learned decades earlier on a mission to Brazil, and subsequently forgot, qualified him to strike up a conversation with every Hispanic we encountered at the grocery store, library, restaurants, etc. I have many memories of their patient smiles as they tried to understand his commentary on the weather or last night's Sun's game in Portuspanglish.

When he was given an ongoing assignment to address Spanish-speaking congregations of our church, he refused the interpreter that was offered him. Rather, he preferred to write out his messages in English on a large yellow legal pad and pass them off to my brother Jeff, who was fluent in Spanish and would interpret for him. He always began those talks by joking that if people didn't love what he had to say, it was because Jeff had translated it wrong.

Seven months later, Dad was suddenly gone. When I look back on that blurry time, of receiving the news, the funeral, and sorting through our unexpected loss, one memory that stands out to me is how peaceful Jeff was. He was Dad's firstborn, only son, and favorite teammate. I knew the loss for him was devastating and yet he was so composed, and calm. Sad, but strong.

I found out later, after he told me of this experience, that one of the reasons for his inexplicable peace was the echoing of this question asked by Paul to the Corinthians, "Oh death, where is thy sting?"

Death is a lot of things. It can be confusing. Sad. Lonely. Heartbreaking. But the sting of it was taken away on Easter. On Easter, Christ emerged from the tomb, overcame death, and promised that we will too.

Much like my dad's attempts to converse in Spanish, I find myself inadequate to express exactly what this means to me, but willing to try.

The kids and I went grocery shopping at Safeway this morning and when we were finished, decided to browse through the Easter display.

I was sifting through the shelves - and half ignoring their desperate requests for jelly beans, stuffed chicks and chocolate bunnies - when Cal hands me this. 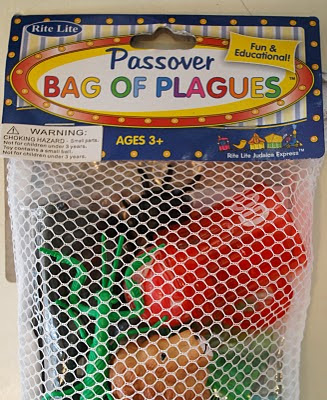 I beg your pardon?

I read the label again, confirming that yes, that there was a bag of PLAGUES. Who knew? The calamities suffered by the Egyptians? The disease, the darkness, the locusts…Turns out those weren’t just the wrath of God unleashed on Pharaoh. Those are toys you can put in your child’s Easter basket.

And I for one could not resist. I had just told the kids we didn’t have enough money for popsicles, then I turned around and tossed a bag of plagues into the cart.

The fun started at the register. Perhaps I’m easily amused, but I loved seeing “bag of plagues” on my grocery receipt, right between “Tostitos” and “parmesan cheese.” 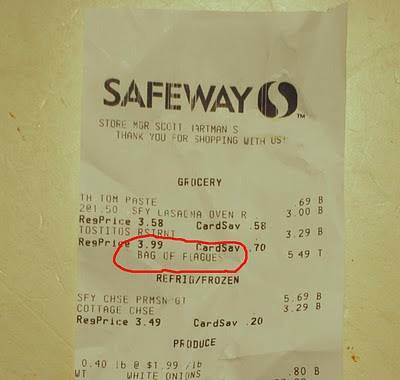 Now let’s take a look inside -

First, we find the usual items one would expect in a child’s bag of plagues. Blood, lice, locusts, wild beasts… 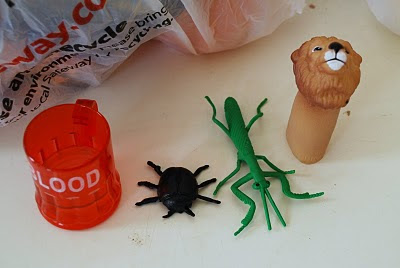 Then of course there are boils. 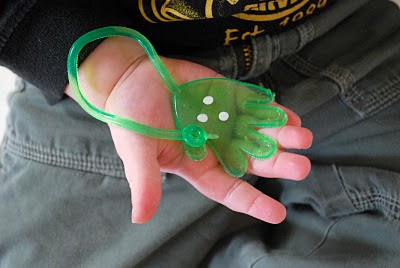 Most kids today have never even heard of boils, and I think it's high time they learned. Boil Handz could be the next Silly Bandz.

The cow is cute, but don’t be fooled. 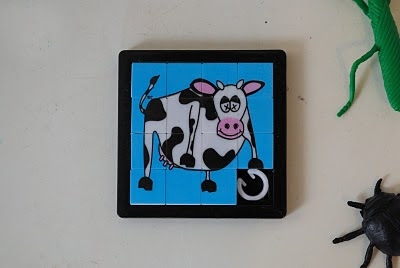 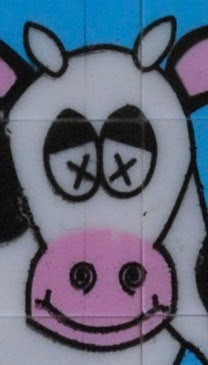 The frog? Not diseased. Leah loved the frog. 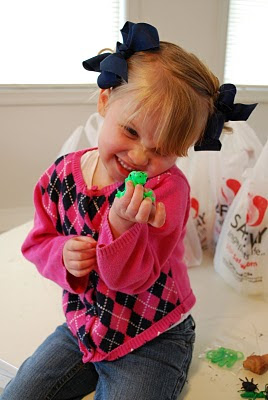 Until I told her to imagine millions of him, overflowing the neighbor’s pool, filling up the streets, spilling through our windows and into her bedroom…. 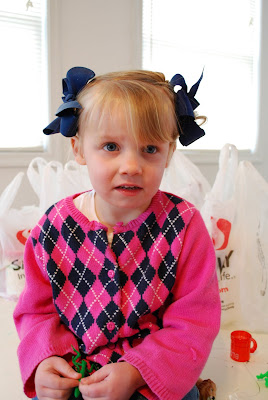 Here is Cal, plagued by darkness... 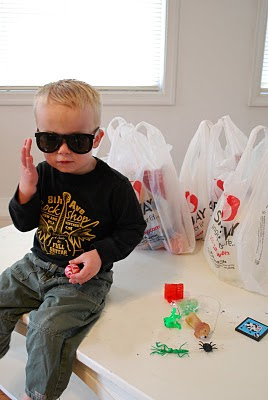 The bag also contains a puzzle, 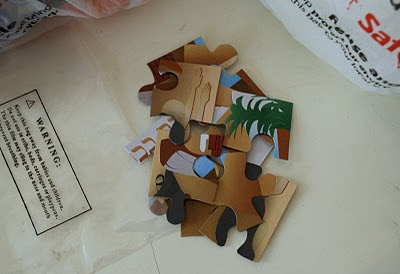 Which will go in Jolie’s basket, obviously. 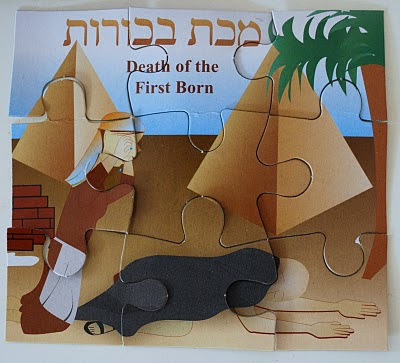 She might be disturbed at first, but rest assured I can comfort her with stories of people slaying innocent lambs, slathering their blood above the door, and then listening to the deafening wail of Egyptians whose firstborns had been killed. Sweet dreams, darling, that is the final plague.

The label promises that all 10 are “Fun & Educational,” and I would have to agree. I think another selling point are the kinds of arguments these toys are likely to prompt among siblings (“Quit touching my boils!” “Take the lice out of your mouth!!” “Where’d you hide the blood??” etc.). With a little luck, these kinds of exchanges will occur in public.