I read an article last week in The Washington Times about an Italian art historian who claims to have finally discovered who the real Mona Lisa is.

He announced at a press conference in that she is actually a he, inspired by a young male assistant of da Vinci. In response, the Louvre essentially threw back its head and laughed.

This got me thinking.

It has been 500 years since the Mona Lisa was painted, and we still have no idea who is behind her smile. I wonder if this was Leonardo’s intention, or if it drives him nuts that we’re still arguing about it, and that his inspiration has never been given proper credit.

In an attempt to avoid similar confusion among historians 500 years in the future, I would like to take this opportunity to provide a verified interpretation of my own personal collection. If anyone is reading this post in the year 2511, this is Leah’s art. 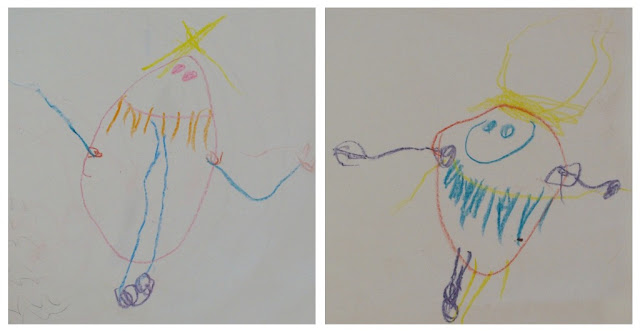 She drew it at church, when she was four.

It is her mother, with orange teeth and legs that protrude from the jawbone, and her father, with yellow horns and blue chest hair.

While Leah's art is more eclectic, Jolie has always tended toward a particular subject matter.

It first emerged in this sketch, which I posted a couple of years ago. 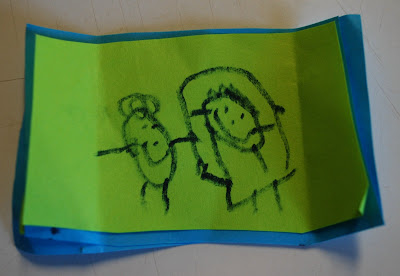 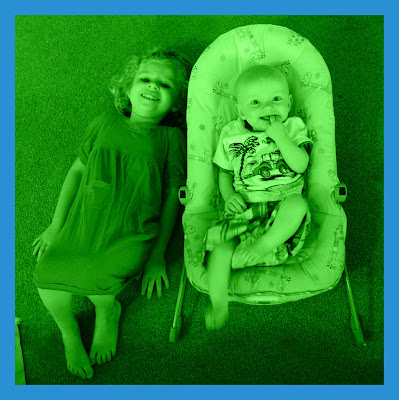 Her little brother has been her most prominent subject ever since. This piece was a school assignment, entitled: “What I like to do on a snowy day.” 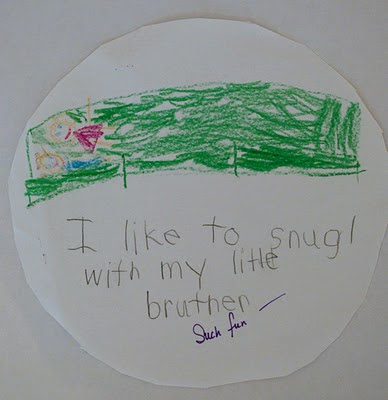 Art historians will find this work of particular interest, because it is the first sketch of Jolie’s in which we notice the emergence of a secondary inspiration. There is of course, the ever-present baby brother. But if you look beyond the brother, closely, your eye will begin to discern an appearance by the nasty green couch we got free off Craigslist. 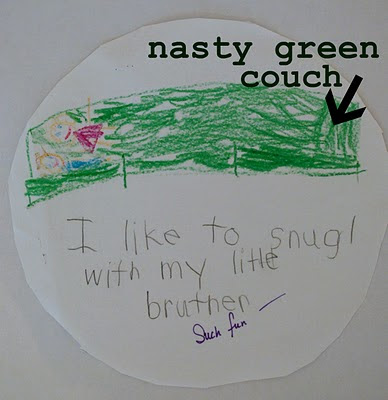 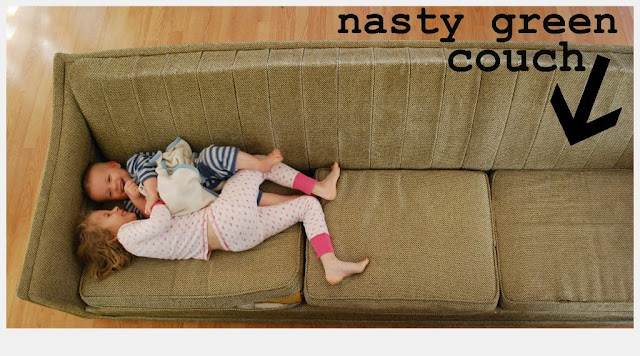 I’m no curator, but I find it touching, the way she was able to capture a child’s tender affection for a piece of furniture, in spite of its ragged appearance, musty odor, bacteria, mites, etc.

Unfortunately, every great artist has their tragedy, and Jolie is no exception.

Hers occurred in early January at Macy’s, when her mother fell in love with a cozy, gray tufted sectional. She stood helplessly as her father purchased the couch, arranged for delivery, then explained that the nasty green one would no longer be part of the family. In fact, in would no longer be part of any family, but would be destroyed at the dump in order to protect the DC area from the risk of contamination.

The new couch arrived a month later, and is everything the old is not. Lovely. Cozy. Sanitary. Perfect for the gorgeous white felted pillows my mom bought us.

It is hard to explain then, why it's been three weeks, and we still have not gotten rid of the nasty green one. Every Saturday for three weeks Jack has offered to take it to the dump, and every Saturday I've come up with an excuse to hang on to it for just a little bit longer.

And so it remains in the family room, unapologetically in front of the new couch, while I try to muster up the courage to let it go. I appreciate the value of style and aesthetics, but it seems I also appreciate the value of having something around that my kids can snugl, eat, drink, jump, and pee on without having to worry about consequences.

Maybe Jolie is a more influential artist than I have given her credit. 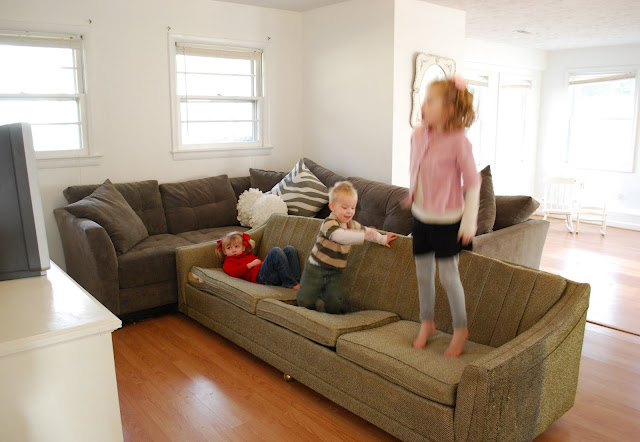 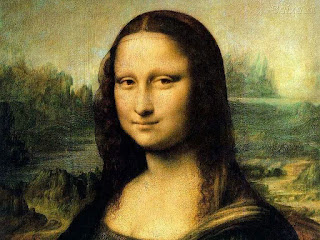 Maybe beauty really is in the eye of the beholder.
at February 25, 2011

This week Leah was given her first Church Primary assignment since sustaining a black eye while serving as the reverence child. We held our breath a little in anticipation of what Jack called, “Leah vs. Primary, Round II.”

The children are learning about the plan of happiness, so she was assigned to give a 1-minute talk entitled, “Jesus Christ created the earth for me.”

I am happy to report that, in spite of a few unintelligible phrases (please refer to subtitles), she pulled it off beautifully. It’s amazing what the spirit can do, especially when combined with the promise of an entire stick of gum.

After enjoying the moment (sigh), I started to think...I'm no physicist, but I understand enough about the laws of energy to know that Leah’s can't be destroyed. Just because she pulls off a peaceful primary talk, does not mean that the wild motion inside her has disappeared. It just means that it’s been stored away as potential motion, waiting for a suitable opportunity to manifest itself.

So I kept an eye on her during the rest of Sharing Time, but she was the perfect picture of reverence. During class she remained in her chair for the entire duration, munching goldfish crakers and listening intently to stories about Jesus. She was quiet on the ride home. She was calm during lunch.

But when it was time for Sunday naps, she was too restless to fall asleep. I could tell that potential energy was desperate to strike. But I fell asleep anyway.

And then she found a Sharpie. And she found her Valentines. And she addressed them. 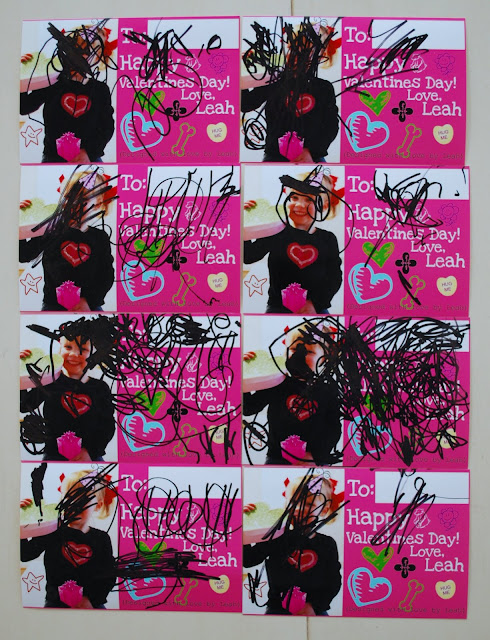