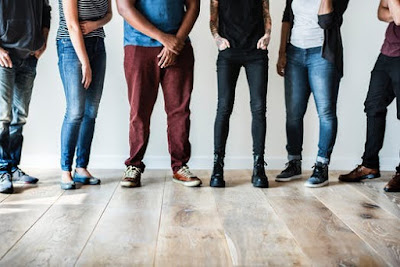 As I watched the election results Tuesday night I sincerely enjoyed, for a moment, knowing that almost everyone in America had something to be happy about. Democrats flipped the House. Republicans expanded their majority in the Senate (right Florida?). We could all celebrate! Even if what we were celebrating was division.

And speaking of division!

This week my 9th grade daughter Jolie told me that she participated in something called a "Privilege Walk" at school. Have you heard of this? I guess it's a thing.

It was an exercise that began with everyone in the class being asked to stand in a straight line. Then, she said, they were told to take one step forward or backward in response to statements about their personal privileges.  For instance, "If your mother went to college, step forward," "If you have ever been unable to afford a meal, step backward," etc.

The questions ranged from family, education and financial status to race and discrimination, and she said that almost all of them prompted her to take a step forward, while other classmates made their way to the back of the room. She described it as painfully uncomfortable. So much, that she admitted as the questions progressed and the gap became wider she opted to stay put regardless of her answers.

But I think feeling uncomfortable was the whole point.

And if it was awkward for her, I can only imagine how the kids in the back of the room must have felt. Middle school is hard enough if you're wearing the wrong shoes, let alone being asked to declare under scrutiny of your peers that your parents are poor, or divorced or illegal.

I guess I'm struggling to understand how this is helpful.

When I asked Jolie how it made her feel, the first word she used was "guilty," and I imagine this to be a pretty normal reaction for any student with half a heart, who has been asked to distinguish themselves from the ranks of disadvantaged friends by walking away from them. I told her that guilt is for people who have done something wrong, and the last time I checked she hadn't personally contributed to the disparity in her community.  Jolie is no more responsible for the privileges she enjoys than the kids behind her are for the disadvantages from which they suffer.

Compassion seems like a more appropriate emotional response, or gratitude, but it's pretty hard to feel either in a room full of silent kids avoiding eye contact and wishing they were anywhere else.

But I'm certainly not looking to conjure sympathy for Jolie.

Please save that for the students in the back of the room, who have been paid a much greater disservice by this ridiculous demonstration. Aside from the obvious embarrassment of admitting what they lack, I wonder what the effects might be of directing young teenagers to identify themselves as underprivileged, and make a comparison to those who aren't.

Is there disparity in America? Yes. Does racism exist? Certainly.  But is it helpful to label yourself as a victim of either? I can't think of a single argument in favor of it.

and heaven knows we have enough of that. Perhaps the worst part is that the only debriefing they received afterward was the question, "How do you feel?" before they were dismissed to collect their backpacks and head to the next class.

How about telling the scattered students this -

Look around you. Look where you're standing, and where everyone else is standing. Now go ahead and feel whatever it is that makes you feel. Grateful. Shortchanged. Guilty. Jealous. Embarrassed. Disappointed. Enraged.

Now, gather back into a straight line

because here's the best thing about living in this country.  A student who ended up in the very back of the room today could someday become the President of the United States. And a student in the front of the room could wind up on welfare. And neither of those outcomes can be credited to the race, education or financial status of their parents.

Privilege only goes so far. Then merit takes over.

If you live in the United States, take a step forward.

If you are at school today receiving a free education, step forward.

If you'll be given the right to vote when you're 18, step forward.

If you will have the freedom to someday apply for college and scholarships, step forward.

If you have a roof over your head, if you are healthy, if you have a dream for your future, any dream of your choice, and understand the amount of work it will take to make it happen, step forward,

November 1st is my dad's birthday.  For years after he passed I would try to come up with creative ways to make the day feel happy, but always fell a little short.

And then ten years ago, on November 1st, this boy was born, and every November 1st since has been so effortlessly happy that I refuse to believe it was a coincidence. 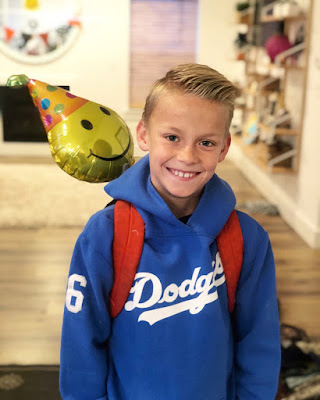 A couple years ago as I was hauling Christmas decorations up from the basement, Eddie offered to assist. I knew this wasn't about bei...