I Can't Hear You When You Talk Like That 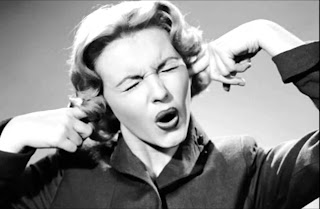 I logged onto Facebook last week, and there it was again. Another version of a video I’ve seen a dozen times. This one featured an overwhelmed, haggard mother hiding from her children in the pantry, eating scavenged potato chips and milk from a discarded sippy cup while she bemoaned the lot of motherhood. “My kids are completely nuts!” she says. “I have to hide in the pantry!” “Parenting is haaaard!"

I’ve seen these videos before, and read countless blog posts in the same vein. This certainly wasn’t anything new, but for some reason it was one more than I could take.

I wonder if I’m in the minority, as most of the responses I’ve seen to messages like this, in the form of likes, shares, and praise, express a similar sentiment - “That woman complaining in her car, who says she hasn’t showered in a week, only eaten Cheerios off the floor, and whose singular accomplishment today is refraining from killing the kids who have robbed her of her sanity? She deserves a trophy! A trophy and a parade!”

And she does. Mothers do deserve trophies. And parades, and at the very least a Snickers bar and a nap. But. I don’t think they need to earn it by engaging in a competition of whose experience of motherhood is the most wretched.

Over the last couple of years, we have seen tremendous strides in women’s empowerment and feminist causes. At the forefront of national dialogue has been a demand for equal pay and equal treatment. Women have waged public battles to expand platforms for bringing these issues to light, and demanded justice for sexual discrimination, mistreatment, and harassment.

We’re women! We tell our daughters. We lead Fortune 500 Companies. We sit on the Supreme Court. We run for President of the United States!

And then, as the message goes, we have a baby. And we become helpless. Grimy. Resentful. Overwhelmed, whining and incapable. We lose our ability to think, stop showering or using utensils, and surrender as victims to the needs of our pesky children.

I’m not talking about postpartum depression, which is an entirely different issue. I’m talking about the stark contrast of seeing women march on Washington and the steps of Capitals, at podiums and on panels, portrayed as proud, capable, and empowered; and then seeing women who are mothers, hiding in their pantries or sitting in their cars in selfie mode, fed up and exasperated, referring to their children as slobs, and demanding sympathy for their burdensome lives.

I have two daughters and wonder, if they were among the consumers of these messages, they wouldn’t run like hell from the possibility of someday becoming a mother, which is often portrayed as more of a punishment than a privilege. I wonder how it would have affected me to see my own mother lamenting on social media that my presence in her life was her undoing.

Motherhood is not my undoing. It is the greatest honor of my life. The greatest, most impossibly difficult honor. I have four children, born within seven years of each other, so I understand well the fatigue, overwhelm and exhaustion. I have experienced anxiety, depression, the heartbreak of a child with a disability, and the necessity of eating chocolate chips in the closet. The 13 years since my first daughter was born have introduced me to entirely new levels of inadequacy, fear and worry, all dealt with among a never-ending rotation of dishes, laundry, meal preparation, sleep training, homework, tears, and diapers.

I’m not asking anyone to pretend that motherhood is easy. There is certainly a danger in painting Pinterest versions our ourselves online. What I’m suggesting is that perhaps we’ve overcorrected. There’s a difference between sharing our struggles in the spirit of engendering empathy and creating a sense of community, and competing to elicit sympathy by painting the most pathetic portrait of motherhood. If you honestly haven’t showered in a week, and the only thing you’ve eaten today are Mac and Cheese from the bottom of a carseat, perhaps motherhood isn’t entirely to blame.

Consider how we react when a child whines, and why. It’s grating, exaggerated and totally unproductive. The most effective response I’ve heard to a child who is whining is a calm, “I can’t hear you when you talk like that.”

To mothers who whine, I think this also applies.

We can’t hear you when you talk like that.

We can’t hear the surreal anticipation you felt the moment you learned you would be a mother. We can’t hear the indescribable joy of seeing your child’s face for the first time, or the wonder of recognizing your own features in theirs.

When you tell us your children are robbing you of a life you miss, we can’t hear the way it feels when you see their eyes scan the room for reassurance that mom is still there, or the delight you experience after a separation, when they race back into your arms. We can’t hear your connection to the Divine when you are the one pleading to heaven that they’ll turn out okay.

When you complain that your children are destroying your home, we can’t hear the pride you felt when recognizing in their scribbles a depiction of the two of you together, or the sense of accomplishment you get to share as they learn new things. We can’t hear the expansion of your heart as they grow, or the beautiful breaking of it as they gain independence.

When all we hear are the compounding of your burdens,