We are all home today, bunkering down for the hurricane. School has been canceled, and Jack gets to stay in as well, as all “nonessential federal employees” have been ordered out of DC. Thank goodness economists are considered nonessential! (says the nation 16 trillion dollars in debt)

We've set up a tent in the front room for the kids to play and sleep in, as it’s the only area of our house not surrounded by gigantic old trees that tend to fall over in storms and kill your babies. I'm confident we'll be safe here, and comforted by the fact that we're stocked up on gas, water and Halloween candy.

So, before the pounding tonight that will likely knock out our power, I thought I would dip into the supply of mini Snickers, and upload our Halloween pictures from the weekend.

My babies do love Halloween. So much, that they grow fangs in October. 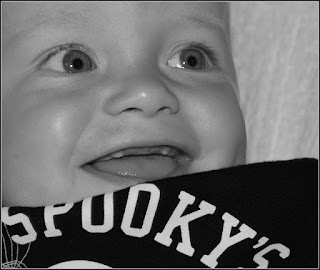 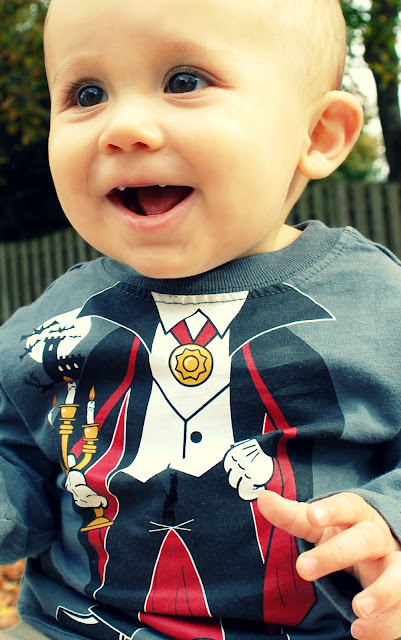 Jolie does not have fangs, but at the rate she's dropping teeth it's only a matter of time. She wanted to dress as a popstar with purple hair. 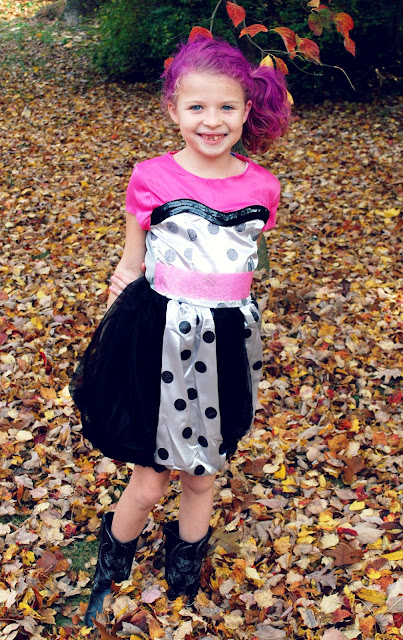 Leah, a doctor. With purple hair. 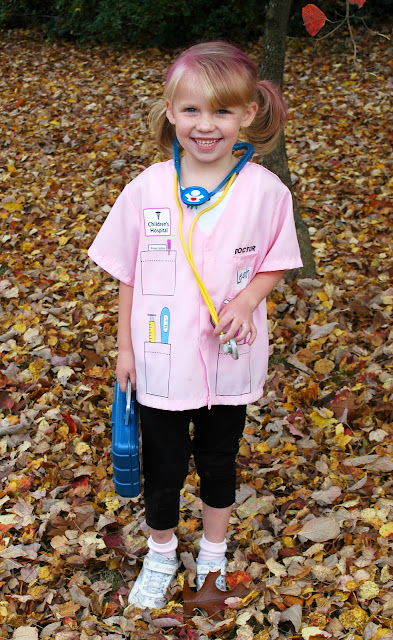 If I had a crystal ball that could see into their futures, I think it would tell me they got their careers switched. And I mean that in the most encouraging way.

And finally, the boys 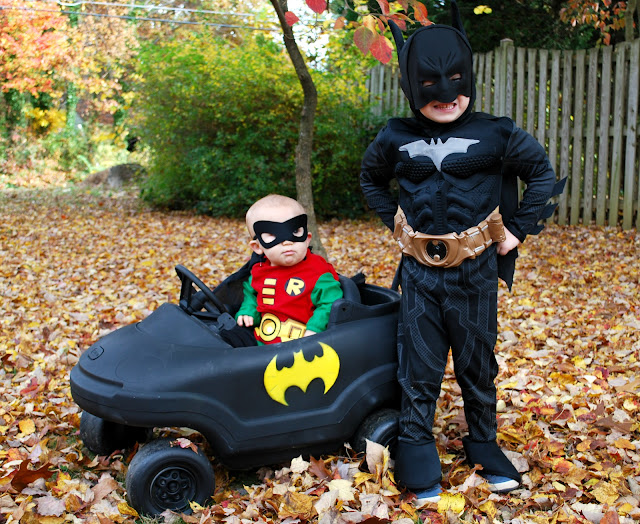 Throw up the bat signal! Someone just ran off with my heart!

They've been living in those costumes for about a week now. The customers at Costco have never felt so safe. 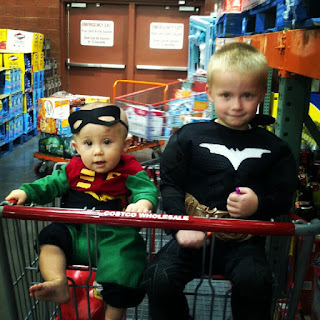 Though they are most in their element when cruising the Batmobile. Thank you Chrissy Warner for the car! 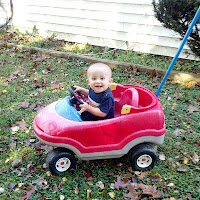 And thank you Aunt Jane for the idea, and Kerry Reeves for showing us how it's done (It takes a village to raise superheroes!)

And speaking of superheroes, Jack carved our pumpkins into the shapes two of our favorites. 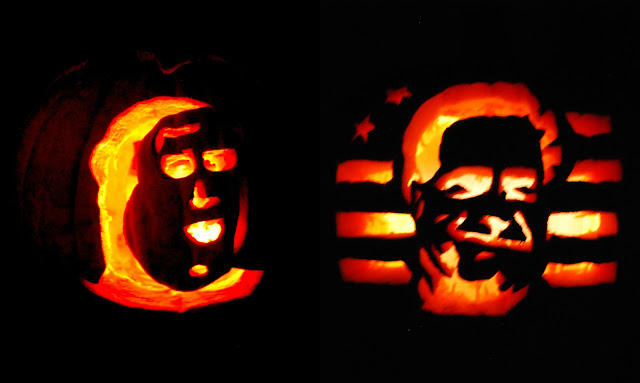 My parents have 17 grandchildren, aged 14 to 8 months, and when everyone gets together, the house always stays clean.

Toys are put away. Beds made. Floors vacuumed, garbage emptied, furniture dusted, and there is never, ever, a dirty dish in the sink. (If you’re holding your breath for a confession of sarcasm, grab an oxygen mask my friends! I am being completely serious.)

Is there hired help involved, you wonder? (Don't be silly! I don't even help. The kids do all the work.) Well then, are the children behaving under duress? Are these gatherings held in a home, or a penitentiary??

I can assure you that everyone acts under their own volition, and that the time spent together is heavenly - There is laughter and Legos, dress up, dance parties and marshmallow roasting.  But in between, there is also a lot of pitching in, picking up, and putting away.

The secret to the success, is GrandmaMall.

A couple years ago, my mom started collecting treasures for the grandkids wherever a good deal was to be found - the Target dollar bins, holiday clearance sales, etc. When the kids came to visit, she would set up the finds at her kitchen table as "Grandma's Store," where the items could be purchased using tickets earned by being helpful and pitching in around the house. 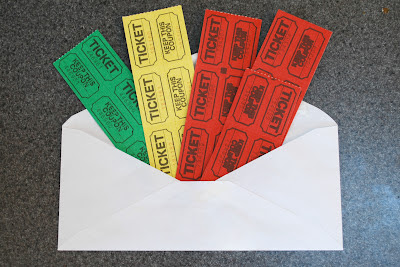 The idea was a success, and a new tradition born. Every year the inventory expanded until this year Grandma's Store finally closed its doors, giving way to the launch of GRANDMAMALL. 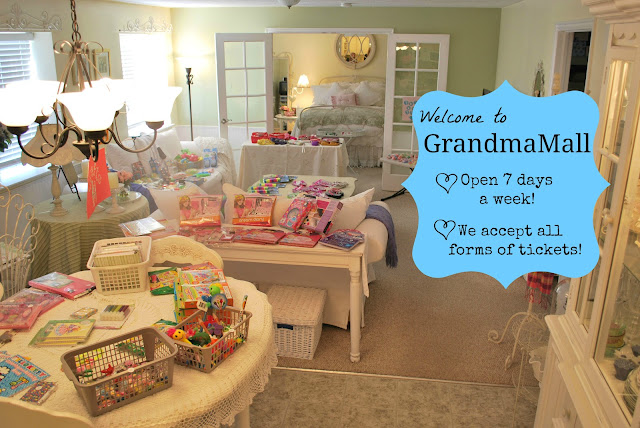 Jack says that next year he is hoping for the launch of Grandma Mills. And by 2014, GrandmaMallofAmerica. 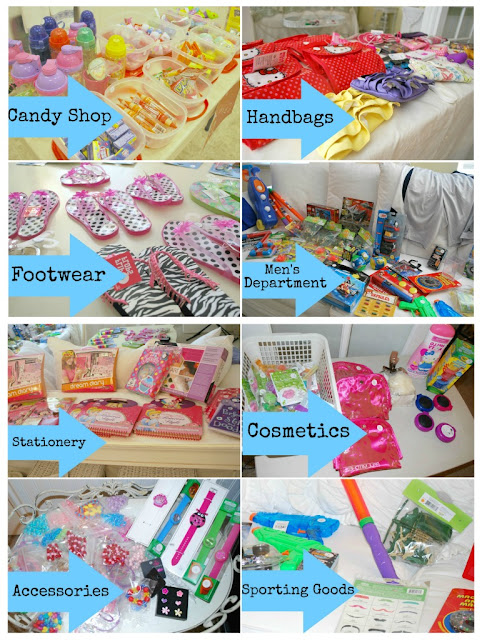 To call the venture a success would be an understatement. It was capitalist greed at its finest. The kids were constantly asking what they could do to help. Once the toys were all put away, beds made and every surface of the house had been dusted and sanitized, we had to start getting creative (Who knew cereal could be alphabetized?) Once or twice I may have been caught offering tickets to the first kid who would surrender their Skittles, or fetch me a Dr. Pepper. 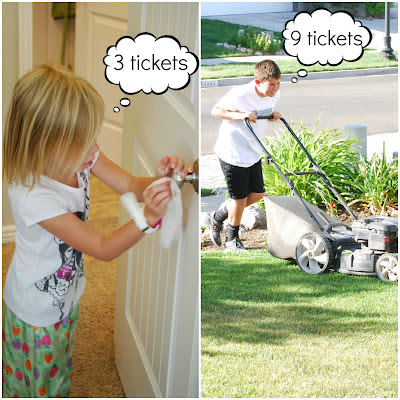 After three days of initial earning and saving, it was time for the Grand Opening. 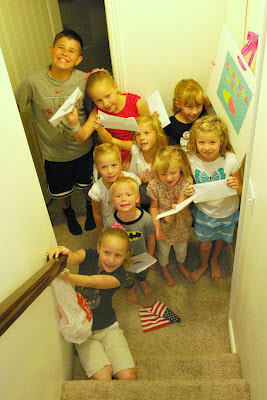 Don't let those adorable smiles fool you. It was like Black Friday out there.

To ensure inventory control, Jack & Eddie were enlisted as mall cops. It was the fourth time in my life I kicked myself for never purchasing a Segway. 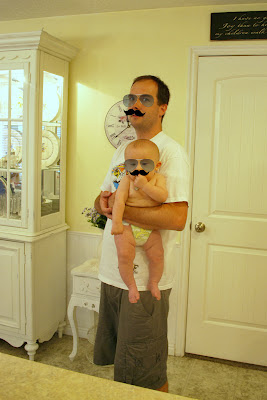 Finally, at 9:00am, all the scrubbing and sweeping finally paid off.

The doors opened, the crowds entered, and dreams came true. 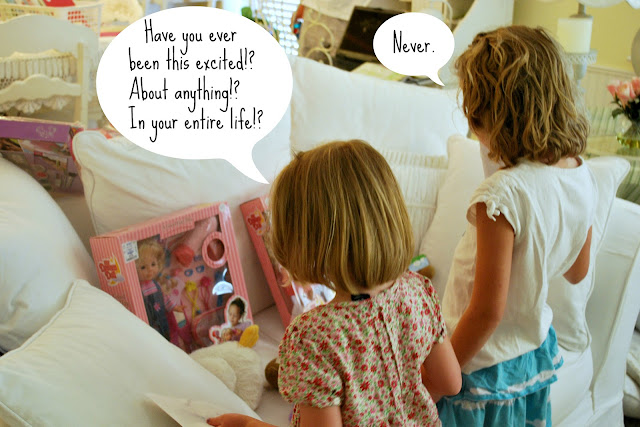 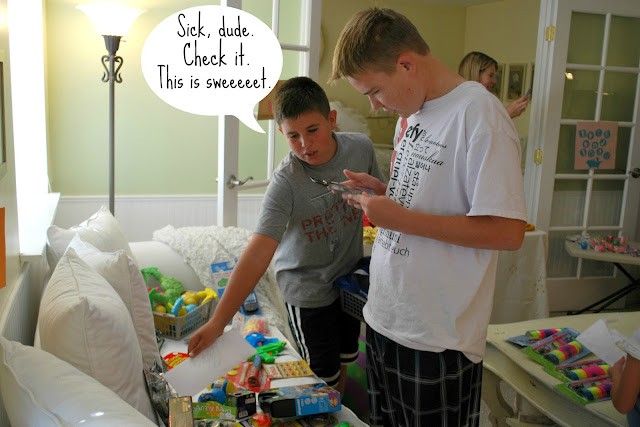 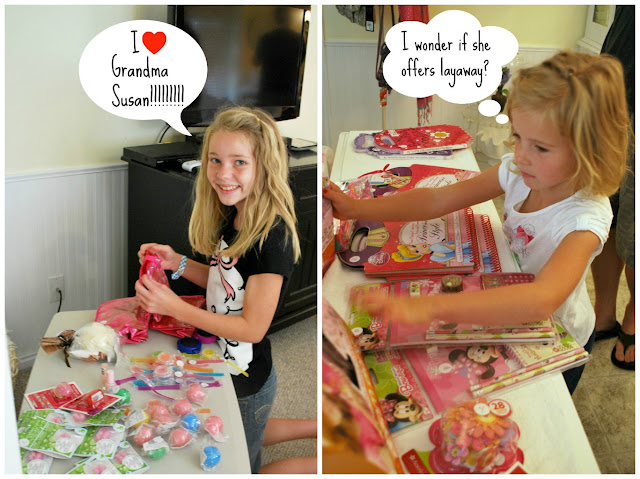 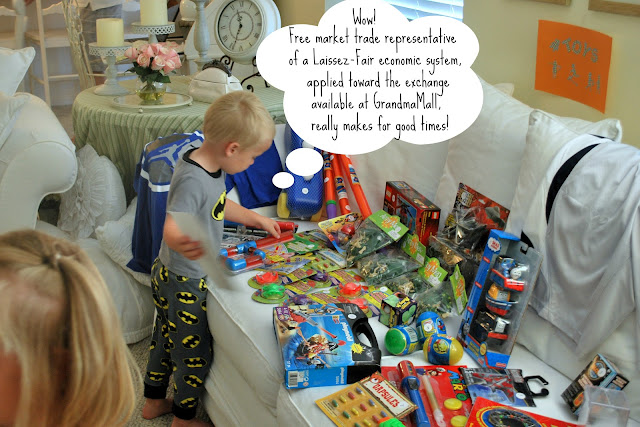 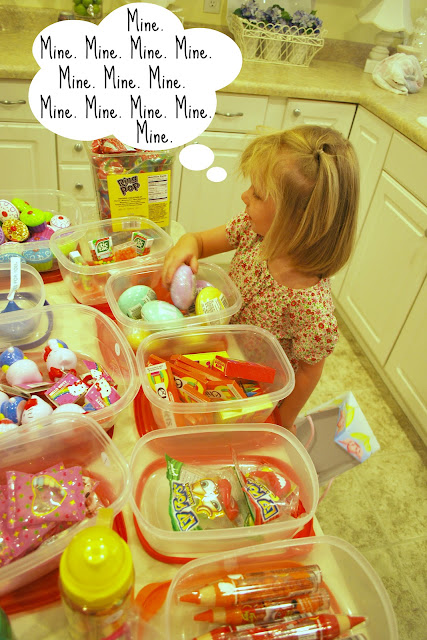 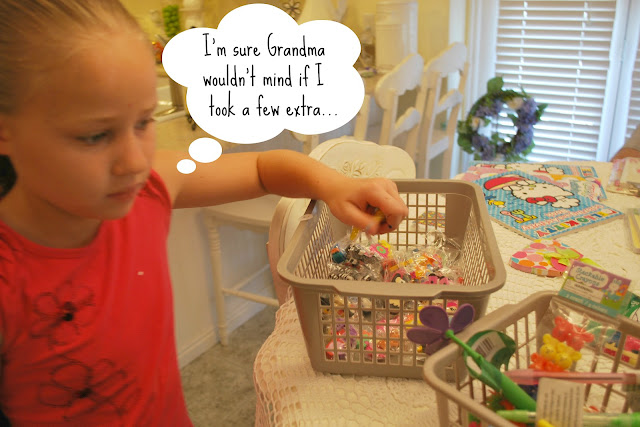 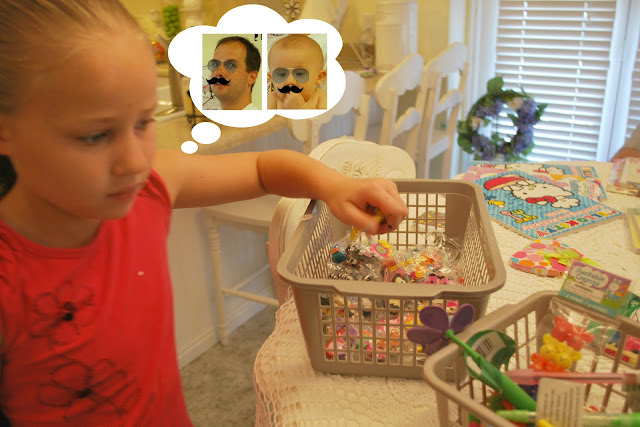 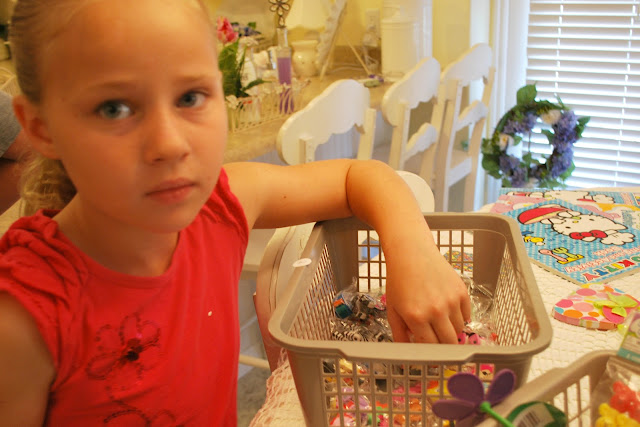 On the last day of our visit, amid the tearful goodbyes, Grandma Susan cheered everyone up by offering a clearance sale, 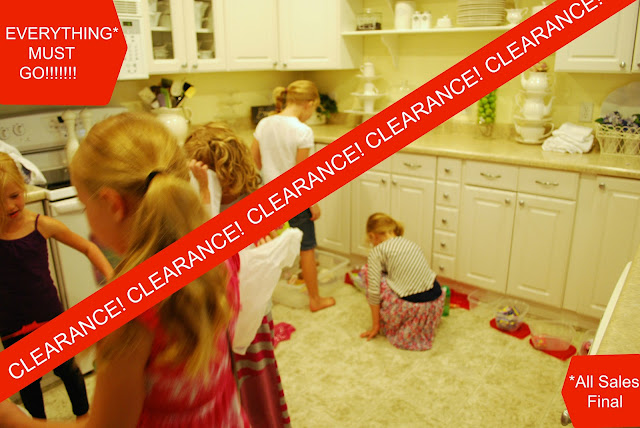 where all remaining inventory could be purchased at the rock bottom price of a hug and a kiss.

Customer service had better prepare itself. I have a feeling that as the years go by, every little shopper is going to find their way back to Grandma Susan's, with all the love they've collected over the years, and they're going to want to return it.