A few friends have requested something called a “birth story.” I hope this is sufficient.

I found out I was pregnant last May, just before my 32nd birthday.  The first order of business, after buying his obligatory “Big Brother” t-shirt, was finding an OBGYN willing to liberally prescribe Zofran for my nausea.  I struck gold when I found a doctor who not only fit the aforementioned bill, but had the added bonus of having been sued for malpractice in 2002.  The beauty of doctors who have been sued for malpractice is that their offices are not exactly booming with patients (in spite of being cleared on all counts, rest assured, maintaining his license and position on the hospital board, and being one of the most lovely people I have ever met). While expectant friends of mine were waiting up to an hour and half to be seen at the hot practices in town, I was greeted with open arms each visit, and literally never endured more than a 5 minute wait.

At 8 months along I called the office and floated the idea of scheduling an induction, asking if he would consider “medically necessary” the fact I'm a born planner.  He readily agreed, and confided that he and his wife had actually been hoping to attend a medical conference in Florida on my due date.  We made a good team, me and Dr. T.

I texted Jack at work with the happy news that his second son would arrive one week early, on January 17th.  He responded that January 17th was the anniversary of when the Drudge Report broke the story of the Clinton Lewinsky affair, and that Jack’s birthday (August 17th) was the anniversary of when confessed.  What! Meant to be! Also, that the baby would be born on the same day as Michelle Obama.  Well then.

At  on the First Lady’s 47th birthday, we checked into the hospital.  Eight hours later, after my easiest labor and delivery yet, baby was born at , , and I have no idea how many inches.  He was healthy, heavenly, and handsome like his dad.

That evening Jack treated me to date night.  Chipotle in my recovery room, which we ate while he watched PTI, and I gazed at my new little bundle.

After dinner he picked up the kids and brought them to meet their brother. It’s tradition in our family that babies come to earth bearing gifts for their new siblings. In addition to coloring books, crayons and playdough, this child arrived, per Jack’s request, with four Nerf N-Strike Nightfinder guns and a stockpile of ammunition.  I liked to think that during my hospital stay everyone was at home missing me sadly, but suspected otherwise when I arrived and found bright orange darts scattered through every corner of the house.

Not that I myself had been suffering during my time away, thanks to the best hospital food in the .  Beyonce’s million dollar suite had nothing on my delectable six-page menu of whatever I wanted, whenever I wanted it.  I took full advantage and came to know the food delivery staff well, including a talkative 19-year old girl named Lesbia. I don’t know if birth stories typically include the name of the person who brings your food, but in this instance I found it noteworthy.

Settling on a name for my own baby is a long story for another day, but suffice to say that the road to Eddie was a bit winding. In a few days however, when the vital records office receives our $10 check and minor child name change form, I’m hoping we can all look back on his identity crisis and have a good laugh.  His full name is Edson Jack Erb.  Depending on social circumstances, he will answer equally to Eddie (at school), EJ (giving people high fives), Edson (playing professional sports), Edson J. (serving as a General Authority) or Little E (riding his tricycle).

Friends and family have welcomed him with open arms, and spoiled him with love and gifts.  His favorite present arrived two days before he was born, when my sister Aileen delivered him a BYU roommate, Mack Bennett Bracken, seen here at , of cousin perfection.

We’ve been home from the hospital for a week now, just the six of us.  Both Jack’s parents and my mom visited around the holidays and spoiled us rotten, so we honorably excused them from grandparent duty and are flying solo. I’ve been enjoying a sleepy but blissful revolving door of nursing and naps. Jack, meanwhile, has repaired the furnace and the car, assembled a loft bed for Cal, done all the dishes and laundry, prepared the meals, run the errands, and volunteered in the classroom, breaking only long enough to play outside with the kids or to instigate their epic indoor Nerf battles.

Every night when the house is finally quiet, we collapse on the couch, and count our blessings.

There are only two occasions in life – birth, and death, and I have experienced both in my family – when the world and everything in it respectfully turns around and takes a step back, leaving you alone in your little nest to hunker down and focus exclusively on what matters most.  Your family.

Our phone and doorbell haven’t rung.  Jack’s projects at work have been put on hold.  We’ve let emails go unanswered, homework be neglected, and dust settle where it may.

For once I haven’t cared about the toys scattered all over the floor, the pile of mail stacked up on our desk, or the fact that showers have been few and far between.  For one peaceful week, I’ve been able to put all of that on hold, and focus exclusively on welcoming this little spirit to our family, wondering who he is, and appreciating the feeling that heaven is on earth, and in fact somewhere within the walls of this old brick house.

Tomorrow morning, life will resume. O alarms will ring again after their two week hiatus.  Jack will board the Metro and head back to work. I’ll return to the preschool carpool, cleaning the bathroom, monitoring math homework, and deciding what to make for dinner.  Gradually, the pace of life will pick back up normal, and the messes and piles of mail that annoyed me before will start to annoy me again.

Thank goodness we get to keep this little reminder of what matters most. 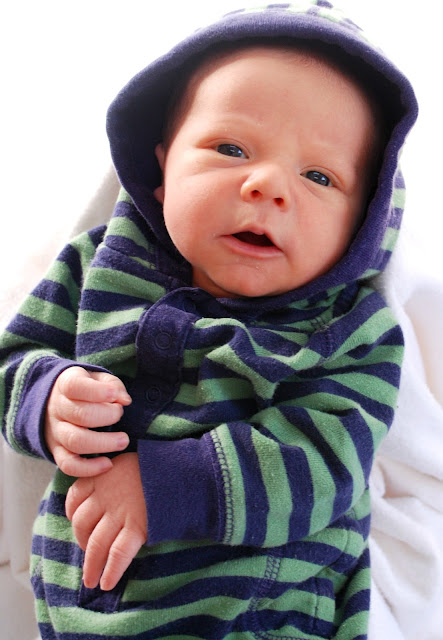