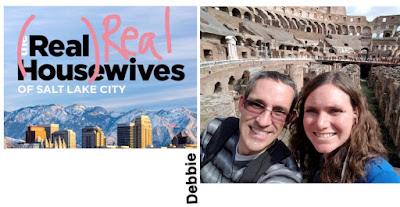 I met Debbie at her house as she was wrapping up class for the day. She's a kindergarten teacher, instructing now entirely online, and I wanted to interview her about what it's like to be an educator during the pandemic.

She answered the door with an apology.

"I'm sorry," she said as she opened it. "I really should have cancelled. I feel bad you came."

She told me that her circumstances had recently changed, and that within the week she would no longer be teaching her class. We cancelled the interview, but she invited me into her home anyway, and we ended up visiting for an hour and a half.

When I returned home, I went through my list of nominees for this series, trying to decide who would take her place.  The more I thought about my conversation with Debbie however, the more evident it became that as impressive as it is to adapt to teaching in a Covid environment, it was possibly the least impressive thing about her.

Debbie is, foremost, a survivor. At 16, while crossing the street near her high school, she was hit by a car and thrown 30 feet before landing on her head. Her recovery was miraculous and from that moment, overcoming became a theme in her life.

Her accomplishments - A college education, teaching career, strong marriage, and two kind, creative (bilingual!) children - are impressive by any standard. But when you consider what she has overcome to achieve them, they are extraordinary.

For the past ten years Debbie has battled bipolar disorder and psychosis. Her challenges have included hospitalization, relapses and continuous rounds of medical trial and error. But even in moments that test her to the limit, she has never given up. And by continuing to walk such a difficult path, she is paving a way for others who struggle as well.

Debbie rejects the stigma of mental illness, and speaks openly and honestly about her diagnosis. Her friends tell me that she has increased their empathy for those who suffer, and helped them not feel alone in their own challenges.

She understands darkness, but is also adept at seeking light. Debbie invents games and dresses up guinea pigs in costume for her kindergarten students. On weekends she can be found mountain biking with friends or exploring hiking trails with her children. She is an avid reader, the first to offer to watch neighborhood kids when someone is in a bind, and the kind of mom who signs up for bubble runs and camps out on the trampoline.

In stark contrast to the Real Housewives, there is nothing about Debbie that is edited, filtered or extravagant. When she invites you into her home, it's not in hopes that you will be impressed by it or by her, but rather an opportunity to make you feel welcomed and understood. She puts you at ease by highlighting what others would leave on the cutting room floor.

The trailer to Real Housewives of Salt Lake City tells you that "perfection is attainable," but don't worry. Women like Debbie will reassure you that's it's a myth.

Would you like to nominate an inspiring Utah woman for (Real) Real Housewives of Salt Lake City?
Please message me on Facebook!