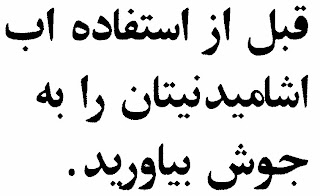 -
After putting the girls down for a nap, I heard a banging on my back window. I looked through the blinds to find an old woman holding a 2-year old child, and opened the door.

She leaned into me and started talking, a bit frantically, pointing and waving her arms. Unforutnately, the only phrase I understood was "No English."

Now I'm starting to get nervous. Does she need medical attention?

After a few minutes, and against all odds, I'm able to determine that she speaks Farsi. So, I hold up my phone up and say, "I'll find Farsi. I'LL FIND FARSI." (like I know who the heck to call)

I tried a friend who wasn't home (she doesn't speak Farsi anyway), then our apartment management office.

"Housing"
"There's a woman in my apartment who needs some kind of help, and she only speaks Farsi. Do you know of anyone who lives here who speaks Farsi?"
"No."

At this point she's wandering around my place, motioning at things, and I'm close to tears.

Next, I tried praying for the gift of tounges.

After a few more minutes of failed attempts she concluded, I suppose, that I was hopeless, because she collected the 2-year old and left.

I'm now alone and feeling quite defeated, certain that someone is about die as a result of my ignorance.

Then, about 20 minutes later, another knock at the door.

She's back, this time accompanied by a child - about 10-years old - who speaks English. Oh, THANK HEAVENS. I almost throw my arms around the girl.

"This is my grandmother," she says,

"And she wants to buy that princess notebook you had at your garage sale the other day."