Let your light so shiner

Quiz.
The bruise on Leah's face was incurred: 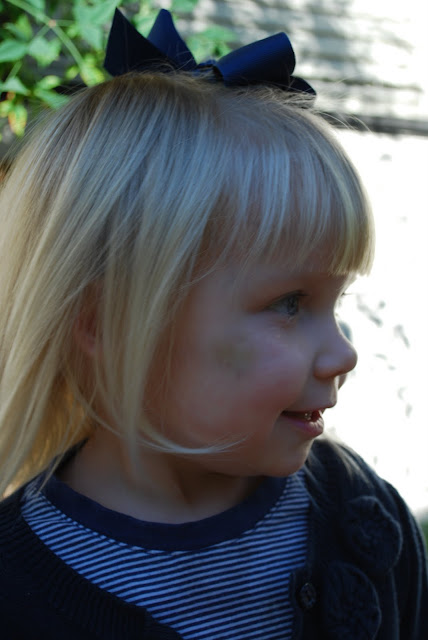 (A) During an encounter with a bully,
(B) In an unfortunate playground accident, or
(C) While serving as the reverence child.
If you have ever met Leah, the answer is obviously "C." She is the only Sunbeam I know capable of sustaining facial injuries in an attempt to model reverent behavior.
For those unfamiliar with LDS culture, it is traditional each Sunday to invite two particularly adorable primary-age children to stand at the front of the chapel and fold their arms, reminding the congregation to reverently prepare themselves for sacrament meeting. 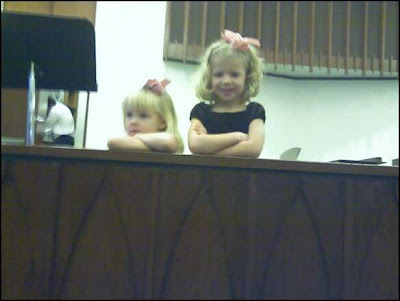 (It is also generally considered inappropriate to snap pictures with your cell phone before worship services. But let's not fret over details.)
So last week, my girls were called to duty. This was no small feat, as Jack was in DC and curtain call is 8:50 am, but we made it on time and things actually started out very well. Leah's arms remained folded for a good 2 or 3 minutes before the boredom kicked in. Then she transitioned to waving, then winking, and then double thumbs up. Just as she was hitting her stride, a member of the bishopric mercifully started the meeting, thanked the girls, and invited them to return to their seats.
Leah, likely assumming that she would receive gum as payoff for her mad reverence skills, responded to the invitation like a starting gun. She ran full speed toward the stairs without looking, slammed her face into the music stand, and was knocked to the ground. Jolie (mortified) helped her to her feet, then she continued racing toward our bench unfazed.
By the time she arrived at sharing time, the bruise had appeared like a badge of glory. Just in time for the primary president to award her highest honor to date - a sticker that says, "I can be reverent."
at February 03, 2010