The short version of this story is that we have four days to decide whether to move to Washington DC, or to Phoenix Arizona.

I will spare you the details, except to say that Jack has received two job offers, that we are very grateful of course, but for the last couple of days have felt like our little family is standing somewhere like this, 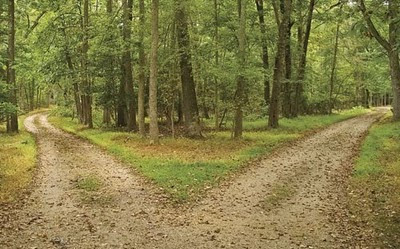 glancing to the left then to the right, then the left and then the right again, wishing someone would just post a giant arrow already telling us which path to take.

On the one hand, we are so excited about . Both born and raised there, the move would mean back after 12 years to old friends and familiar places, close to Sun Devil Stadium and Jack’s amazing family. But then, just as we start to pack up in our minds and head that direction, we glance down the other road, and we see a great job opportunity, and new friends and new adventures. We see the kids visiting Capitol Hill and they look so cute, standing there, smiling, protesting publicly-funded healthcare.

Hot summers or snowy winters? Affordable housing, or east coast tourism? Until one path becomes clear, we have been exhausting all of our decision making capabilities – fasting, prayer, coin tossing. Modern technology has also proved an invaluable debate resource. Jack spends much of his time on Excel, configuring extensive comparative spreadsheets. I spend much of my time on Google, mapping out and proximities to Costco, Target, and Chick Fil-A.

At one point, hoping for an 'out of the mouth of babes' type experience, we even tried asking Jolie to decide for us. She picked Arizona. When asked why, she said, "Because Grandpa Jack speaks English." (I don't think this was a revelatory miracle. I think she's frustrated some of her favorite classmates don't speak a lick. Plus, the second she found out that people build snowmen in DC, she switched her vote.)

I am hoping that you can be more helpful. The clock is ticking, and we are stumped.