Toss Your Hats and Your Heroes 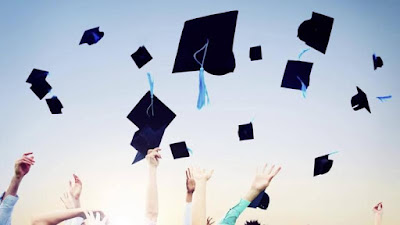 Next week is high school graduation here in Utah, and also for my niece in California.

This has prompted me to consider what advice I could offer the Class of 2018, should they ask, and I decided if the opportunity presented itself I would begin by telling them about Joe Paterno.

Joe Paterno, as they may not be aware, was head coach of the Penn State football team for 46 years, and is the second winningest coach in college football history.  In 2001, a 7-foot bronze statue of him was unveiled at Beaver Stadium in recognition of his contributions to the university and because, well, it seemed like a good idea at the time.

Ten years later, in light of his involvement in the Penn State child sex abuse scandal, the statue was removed, and replaced by trees. The lesson? Don't erect a 7-foot bronze statue in someone's honor while they are alive, and still have a chance to prove you wrong.

I learned my own Joe Paterno lesson in 1993. At the time, I was finishing 8th grade and asked to give the commencement address at the Copperwood Elementary School graduation. My speech, like Joe's statue, seemed like a good idea at the time.

Here is the introduction to it, which I excerpted from what was then my favorite book by Dan Clark. Keep reading until the end. The end is the best part.

He grew up in the ghetto, he never got enough to eat. Malnutrition took its toll, and a disease called rickets forced him to wear steel splints to support his skinny, bowed-out legs. He had no money to buy a ticket to get into the game so he waited patiently near the locker room until the game ended and Jim Brown left the field. He politely asked Brown for his autograph. As Brown signed, the boy explained, "Mr. Brown, I have your picture on my wall. I know you hold all the records. You're my idol."

Brown smiled and began to leave, but the young boy wasn't finished. He proclaimed, "Mr. Brown, one day I'm going to break every record you hold!" Brown was impressed and asked, "What is your name, son?"

The boy replied, "Orenthal James. My friends call me O.J."

No sir! MY hero was OJ Simpson.

A year after I gave that speech, on a blazing hot day in June, I returned home from summer camp to find my family glued to a white Bronco chase on TV. In the backseat of that Bronco, I was told, was my hero, having been accused of murdering his ex-wife and her companion. A year and a half after that, sitting in the back row of a portable classroom at Ironwood High School, I watched as his verdict was read, and heard an outcry of reaction from the diverse group of students around me.

Thirteen years to the day after that, while my two young children played in the next room, I read on The Drudge Report that he had been found guilty of twelve counts of robbery and kidnapping, and sentenced to a minimum of 9 years in prison.

He was my hero. Until he wasn't.

In light of this turn of events,  I would like to offer the Copperwood Elementary School Class of 1993 the following addendum to my commencement address, which I hope can also give the Class of 2018 something to think about.

There was a time when "famous" and "hero" were synonymous, because people became famous for doing heroic things. Abraham Lincoln was famous, because he was a hero. So were Susan B. Anthony, Helen Keller, Amelia Earhart and Neil Armstrong.  All heroes. All famous.

Today, it's different. Today, all you need to be famous are a cell phone and a social media account. As a result, we are living in a culture saturated and obsessed with celebrity. A 2012 UCLA study found that becoming famous was the number one aspiration among children 10-12 years old, surpassing their desire for financial success, achievement, and a sense of community.

So Class of 2018, what is your number one aspiration today? Are you more concerned with your future success, or your Snapchat streaks? Do you dream of being a YouTube star, or a youth leader? Followed on Twitter, or as a teacher? Do you spend more of your time seeking inspiration, or scrolling Instagram? Counting likes, or living life?

Being famous is easy. Being a hero is hard, and we could all do well to identify the ones that most people have never heard of. Your mother, who taught you the value of sacrifice. Your father, who taught you the value of hard work. The coach who pushed you to be better, youth leader who inspired you to be kinder, or teacher who motivated you to dream bigger.

Henry David Thoreau once wrote, "The hero is commonly the simplest and obscurest of men."

A century later, a 7-foot bronze statue of him was unveiled at his former home on Waldon Pond.