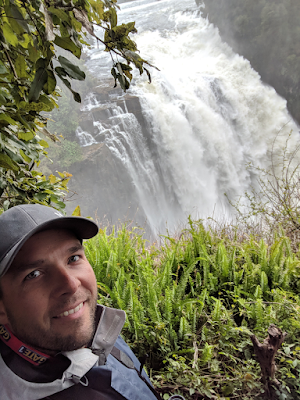 2. He is among the 33% of people who suffer brain freeze while eating ice cream

3. Is in the Guinness Book of World Records for being part of the largest bingo game in the world. Dodger Stadium, 2006

4. You know how, when you make microwave popcorn, you wind up with a bunch of kernels at the bottom of the bag? Jack eats those

5. The title of his doctoral dissertation was "Accurately Sized Test Statistics with Misspecified Conditional Homoskedasticity ??"  (Question marks added for emphasis)

6. His score on RateMyProfessor.com is 5/5

7. Has carried the same wallet for 19 years

8. Drafted his 2004 Fantasy Football team at home while I was in the hospital in labor with our second child

9. Favorite pastimes include watching injuries occur on YouTube, and controlling the sprinklers from the Rain Bird app on his phone

10. His only B in college was in Child Development. Turned out to be a remarkable father anyway.

11. Jack was quarterback of his high school football team, and the only player to get pumped up before games by listening to Lionel Richie

12. Led the team to the State Championship game two years in a row

13. Has been in the same room as Beyonce and Jesse Jackson, on two separate occasions. One of the rooms was a bathroom.

14. Served a two-year mission in Santiago, Dominican Republic for the Church of Jesus Christ of Latter-day Saints

16. Has seen the Big 5 Game on safari in Africa - lion, leopard, rhino, elephant and cape buffalo

17. Jumped off a 200 foot gorge swing without his wife's permission

19. Has the entire script of Top Gun memorized. Willing to recite upon request

23. Built an AR himself, piece by piece

25. Can navigate to any attraction in Disneyland with his eyes closed

32. Met his wife in second grade

35. Invented the word "Wowsted." Only his teenage nieces and nephews can explain exactly what it means.

36. Did you know that celery is the most hated vegetable among adults? Also among Jack.

37. Can play Journey's "Faithfully" on the piano

38. Surprised me once in high school with a doll he sewed out of a pillow case, on the condition that I not tell the baseball team.

39. Happiest when he's playing ball in the front yard with his kids.