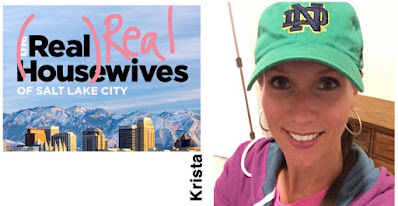 Krista, our first (Real) Real Housewife of Salt Lake City, is a mother of four, a high school basketball coach, and a hero.

Actually, her story is the story of three heroes.

The first is her father, Mike. In 1970, at age 19, Mike was drafted to serve in Vietnam. Krista describes this as the most terrifying year of his life, but knew nothing about it growing up because, like so many who experienced the horrors of Vietnam, he never spoke of it.

Until one evening, when Krista was grown with young children of her own.  He mentioned a Vietnam documentary he had seen on TV, so she cautiously began asking him questions. For the first time in her life he began to speak of small details, including a platoon mate named Stretch. Stretch is the third hero in this story.

Nicknamed for his height, Stretch was Mike's closest comrade. His signature look was a white tank top, and he gave one to Mike so the two of them could match. Mike said that their friendship is what got him through the atrocities of war, and that he had thought of Stretch every day since.  In 1971, Stretch's patrol came under attack and he was shot. He returned home, was awarded the Purple Heart, and the two lost contact. 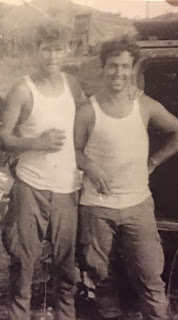 Until 45 years later, when Krista had an idea.

Knowing what it would mean to her father, she became determined to find him. All she knew was that his nickname was Stretch, that he was drafted from West Virgina, and his last name was McMillan. Or maybe MacMillan. Or McMullan? Macmullan perhaps?  It was a daunting task to say the least but Krista, a strong, intelligent, athletic mother of four, is not one who is easily deterred.

She began by writing a letter to every McMillan in the West Virginia phone book - 96 to be exact. 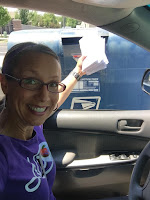 Several recipients responded to express their support, but none resulted in a match. She pushed forward, submitting record requests to the VA, contacting local West Virginia news outlets, and creating a Facebook page that resulted in hundreds of leads. Every little spare moment she had between caring for her young children, Krista spent making her way through lists of responses. None of them panned out.

Until one morning, four months after the search began. She was at the bus stop after dropping off her daughters for school when her phone indicated a Facebook friend request. Accustomed at that point to dead ends and false hope, she said it took a few minutes for her mind to register who it was.

"I had no doubt," she said. "All I had ever seen were 45-year old pictures of him, but those were the eyes. I had spent every waking moment looking for those eyes, and there they were."

Overcome with emotion, she drove to her father's house, teaching her two-year old along the way to say, "Grandpa, we found Stretch!" And from the moment he did, life has not been the same.

The two comrades began messaging, then speaking on the phone, until they were talking every day. Krista accompanied her dad to Stretch's home in Ohio for a reunion, where they two embraced, reminisced, and once again donned matching white tank tops. 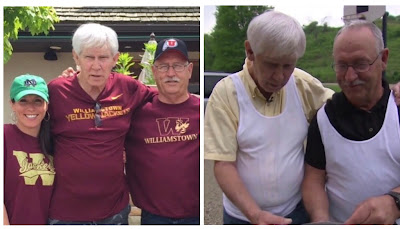 For years they continued to speak daily, until Stretch passed away from complications of Agent Orange exposure.

But the impact of their reunion endures. Mike speaks openly now about his experience in Vietnam. Krista and her children talk often of their "Uncle Stretch," display his picture in their home, and last Veterans Day, her daughter requested to honor him at a her middle school Veterans Day assembly.

I have heard some of the “Real Housewives” referred to as #goalgetters, a term trending on social media. Most often, it's in reference to either achieving a certain body aesthetic, income, or number of followers on social media.

Krista is a (Real) goal getter. Whether raising her children, coaching her basketball team or orchestrating such a life-changing discovery, she is selflessly motivated and fiercely determined.