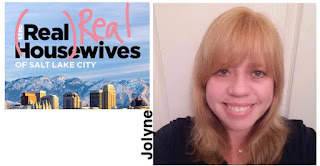 Jolyne, our 4th (Real) Real Housewife of Salt Lake City, has a gift for knowing just what people need, at just the moment they need it. A hug at the grocery store for the woman having a bad day, late night visit to a single mom just when she’s hit her limit, or text to a neighbor to check in on a struggling child.

If you ask her how she does it, she’ll tell you she has an unfair advantage.

So what is it that gives her an edge? Jolyne has had severe hearing impairment since childhood - 92% loss in both ears - but describes it not as a setback, but a superpower.

“My whole life it has forced me to stop and think, and pay a little more attention than normal,” she says. “I don’t get to hear with my ears like everyone else, so I have to watch instead of just listening to words. More often when someone is hurting, you can see it in their eyes more than you can hear it in their voice.”

This heightened sense of perception and sensitivity to others has made Jolyne, who works at Smith's grocery store in South Jordan, a community favorite. But it has been hard-fought.

As a child, Jolyne was terrified of being teased for her disability, and did everything she could to hide it - wearing her hair down to cover her hearing aides, or running away from water fights she desperately wanted to participate in for fear they would get wet and draw attention to her impairment.

She became an expert lip-reader and developed a thick skin that served her well through other challenges as she grew, including the divorce of her parents, and painful decision to put a child up for adoption shortly after high school.

After she married and welcomed a son, Jolyne carved out a life that allowed for limited interaction with others, running an online bookstore with her husband. Then late one evening, she said she ventured to the grocery store to give herself a much-needed break. While there, an employee she had never met went out of his way to make her feel at home. She says she sensed in him a genuine desire to make the world a better place, and was inspired to follow his example.

She began to volunteer there daily, assisting with customer care, until she was eventually offered a job. She has since worked tirelessly to help create a thriving community of customers who support one another an rally together for charitable causes.

Her hearing loss remains a challenge. She depends entirely on lip reading and communicating with customers can be a struggle, particularly in light of the mask mandate. There have also been heartbreaking moments, like not being able to hear her son's voice or laughter. But she is filled with gratitude, saying that she's lucky to have never known life as a hearing person because "being unaware of what you're missing out on makes it easier not to feel sorry for yourself."

"Sometimes I go home and have a good cry," she admits. "But tomorrow is always a fresh start and a new smile."

This optimism is precisely what draws people to Jolyne. Her customers tell me they shop at her store not just for groceries, but also for her genuine concern and hugs.

As a child, her grandfather used to tell her, "If you're not kind, not much else matters." I'm sure he would be proud to know that she understood him perfectly.

Would you like to nominate an inspiring Utah woman for (Real) Real Housewives of Salt Lake City?