Arizona: It's in the Bag

.
Thank you for playing name that tune. Dare I say it was as fun as blog charades??

Based on your comments (confessions), I think it's safe to conclude that an Arizona native's
ability to function as an adult, is determined by whether or not they won a Ladmo Bag as a child.

I don't want to diminish the sacrifice and rearing of my parents, but...My siblings and I did
win THREE in 1984. I'm just saying.
.

I realize that not everyone was as fortunate, and am inspired by the ladmobagless who
have gone on to make good lives for themselves. 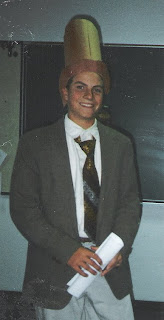 Today, regardless of the row and aisle in which you're seated, everybody wins -
the following video. But first, a word of warning:

Unless you've emotionally prepared, do not google "Ladmo Bag," like Jack did.
Turns out our ultimate childhood ambition was nothing more than a brown paper sack stuffed with Cracker Jacks, HoHos, and a soda from Basha's. I haven't been that disillusioned since I visited Encanto Park as an adult.

Some things are better left the way you remember them.
.
Enjoy, kids.
at February 13, 2009