.
Anyone who thinks a journalism degree is wasted on a stay-at-home mom,
ought to spend the day with my 4-year old.
.
. 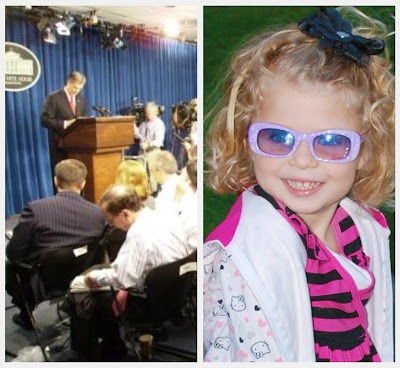 At one point when I was younger, my dream job (and I dreamed *big*) was to work as a White House Press Secretary. Lately there are days I swear I've landed the gig, albeit with a few minor variations...
Instead of standing behind a podium, for instance, I'm usually bouncing a newborn while pushing a toddler on the swing. Also, rather than being grilled by White House correspondents, my press corps consists solely of one very inquisitive, curly-haired preschooler.

But that's if you want to get technical.

Other than that, there's virtually no difference - Jolie may not care why the US is in Iraq, but she does demand to know why our family hasn't been to Disneyland since September. Sure, she's oblivious to the recession. But she has asked me to explain why we can't afford gymnastics lessons.
Health care reform? "Can we fix my cough with a popsicle, instead of medicine?"

Housing crisis? "How come we don't have a backyard?"

Last week during one of our press briefings (press briefings occur when she follows me around the kitchen while I'm trying to make dinner), she threw me a curveball.

"Mom, When you were on American Idol, did you go to Hollywood?"

I told her I've never been on American Idol.

"When Dad was on American Idol, did he go to Hollywood?"

Maybe I should let her down gently.

"Honey, your dad has never been on American Idol either."

She seemed disappointed. For a brief moment, I actually felt guilty for not auditioning.

That has to be a tough awakening - For 4 years you believe your parents hung the moon, only to wake up one day and discover they've never even stood before Paula, Simon and Randy.
It was not what she wanted to hear.

But I had to be honest.

Otherwise, that Ethics in Journalism course was a waste of tuition.
.
at February 04, 2009