Every night, I serve dinner atop maps of the world. 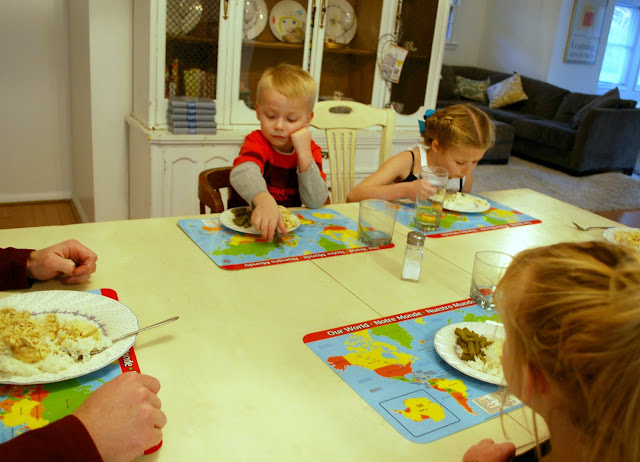 We don't have any formal way of studying them, but the kids enjoy looking while we eat, and asking the names of different countries. Sometimes we might challenge them to put a carrot on Russia, or to tap Mexico with their spoon. If there is any interesting global news that day, Jack or I will tell about it and give a context for its location.

I found our set at Walmart, but have also seen a few options online, and very highly recommend them if you have young kids, and/or if you are the product of public education in the United States.

I say this will all due respect to public education in the United States. I am the proud product of it, and my children will be as well.  Jack's father and grandfather both served distinguished terms as superintendents of public school districts, and I even claim bestie status with Lee Fleming, who is rumored to be the next Secretary of Education.

But. It simply baffles me that Americans can earn a high school diploma without even the most basic proficiency in global geography.  According to a National Geographic survey I read, nine in ten Americans aged 18-24 could not find Afghanistan on a map of Asia. Sixty five percent couldn't find France. Half could not locate NEW YORK on a map of the United States. Twenty percent couldn't even find the Pacific Ocean.

Hold on! It gets worse!

The same survey was given to 18-24 year olds in Canada, France, Germany, Italy, Japan, Mexico, Sweden and Great Britain, and we were outscored by EVERY OTHER COUNTRY except Mexico, which did only slightly worse. Ouch.

When I graduated high school I was aware of my own geographic illiteracy, so I convinced my friend Whitney to register for Geography 101 with me at BYU. Imagine our horror when we discovered that the course was actually about land formations and weather systems and junk like that. (Whitney, if you're reading this, I hope you have forgiven me). We suffered miserably through the quarter, then as soon as it was finished I punished myself for the mistake by declaring a minor in Political Science.

Five years ago, while watching the Miss Teen USA pageant, I actually found myself rooting for Miss South Carolina who, when asked why 1/5 of Americans couldn't locate the United States on a world map, said:


(You remember her answer, right? Click HERE to relive the moment)

She said, "I personally believe that US Americans are unable to do so because, uh, some people out there in our nation don't have maps." And then she started speaking in tongues.

Did she sound like she had been inhaling swimsuit adhesive? Sure. But did she have a point? Yes!! Schools are not solely to blame. Wouldn't it be wonderful if we all had maps in our homes, and wouldn't it be even better if we served dinner on top of them? I personally believe that it's about more than teaching my kids to point to a country and recite the name of it. It's about instilling in them a framework for relating to the world beyond their home.

It's also about forming precious family memories. Like the time I served chile rellenos, and  Leah pointed somewhere in South America and said, "Mom, what country is that?"

And I said, "That's Brazil, sweetheart." 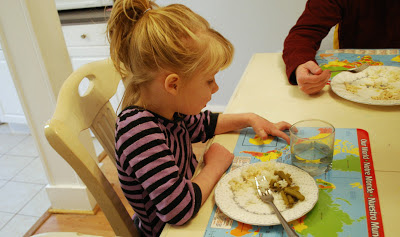 Ah well. Those chile rellenos were gooooood.
at February 20, 2013