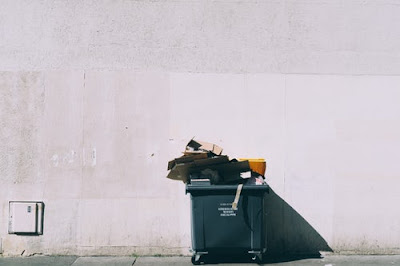 and I was on the verge of a meltdown. Jack was in graduate school at the time, and consumed with his dissertation. We had a two-year old and newborn, no money, and lived in a tiny, old apartment without a washer, dryer or dishwasher. I was tired, had just put the baby down to sleep, and the combination of all of it suddenly caught up with me as I confronted a pile of dishes in the sink.

Jack, finding me in tears, did what good husbands do. He listened patiently to my laundry list of complaints, rational and otherwise, and then he offered solutions.

Now normally when I'm in such a state, offering solutions is the worst possible thing he can do. Normally all I want is for him to tell me that I'm absolutely right about everything, and then offer to go buy me Ben & Jerry's. But this time, I was all ears.

He brainstormed a number of time-saving ideas. Among them, he suggested, "What if we didn't have to wash dishes? What if we used paper plates and cups instead?"

He may as well have offered to hire a full-time housekeeper. With that one suggestion, the clouds parted and life seemed manageable. We went to Costco the next morning and stocked up on disposable bliss.  "Don't worry about putting those in the sink after you eat," I would announce dramatically at dinner.  "JUST THROW THEM IN THE GARBAGE." As though I was referring to my problems, and not the dishes.

I attended a gathering for mothers in our student housing complex, and decided to gift everyone with my new life hack.

"So you know what's made a huge difference for us?" I said, as I buckled the two-year old into a swing. "We started using paper plates and cups, like all the time, and it's just really simplified my life."

Until, I swear on my life, one mother burst out laughing. "Wait, are you serious?" she asked. "Like, every meal? All that garbage!"

The next couple minutes were so awkward I started to second guess whether I had accidentally said, "So you know what's made a huge difference for us? Every night when the kids go to bed, we pull out a ouija board and use it to summon Satan! You guys it's the best!"

In retrospect, I understand that my declaration was a bit naive. These were graduate students and spouses of UC Santa Barbara. Our complex boasted a community garden, extra recycling bins, a center for exchanging used clothes and furniture, and weekly rounds made by a cloth diaper truck.

I was instructed that morning on sustainability and environmental impact and and couldn't come up with a single intelligent response. I just smiled, and nodded, and confessed to what I hadn't realized was a sin. And then I went home, and Jack once again found me in tears.

Now, I mentioned before that Jack is a good husband. Jack is also an economist. To his core. He sees the world objectively, in terms of opportunity cost and competing preferences, and it is from this perspective that he absolved me of my guilt.

During an overwhelming time in my life, those stacks of paper plates and cups were like towers of support. We were choosing to sacrifice the extra money they cost in order to have extra time for sleep and children. My critics on the playground, on the other hand, were choosing to sacrifice their time and dishwater to fulfill what they felt was a moral obligation to the earth.

But what about the earth?

The earth can handle my paper plates. According to New York Times science columnist John Tierney, all of the trash generated by Americans for the next 1,000 years would fit on 1/10 of 1% of land available for grazing. And much of that will be covered with grass and converted to parkland, like beautiful Freeman Park in Idaho Falls.  Did you know that the US Open is played on the site of a converted landfill?

But what about the trees?

The trees will also survive my plates. Jack explained that this is a simple matter of supply and demand. Paper products come from trees, many of which were planted for the purpose of becoming paper. The more paper that we use (and throw away), the more trees that are planted. As more trees are planted, more carbon dioxide is absorbed, thus making the air cleaner, a concept known as sustainable forestry

In fact, he said that scientists are now able to produce cultured beef - meat produced synthetically, in labs, and that if this were to take off, it would cause the population of cattle to go down, and not up. So, recyling paper may actually reduce the number of trees. I think I just wrote a new verse of Ironic for Alanis Morissette.

But what about recycling?

The best reason for recycling that I've been able to find is that it makes people feel good. Aside from that, it doesn't make a lot of sense.

According to William Shughart of Utah State's Hunstman School of Business (among many others), the cost associated with the process of recycling almost always outweighs the benefits. He says that it is actually more expensive and resource intensive to recycle paper, than it is to cut and replant trees. It is also cheaper to make new plastic containers than to recycle old ones and again, we have more have enough space to bury them and convert the land.

John Tierney also says that, according to environmental author Chris Goodall, the simple act of rinsing cans and bottles before putting them into the recycling bin can actually release more carbon into the air than recycling itself.

A few years after the paper plate incident,

we moved from California to Virginia, and learned that the school our children would be attending was "Green Flag Certified," an honor bestowed for their eco-friendly efforts. In addition to learning to read and write, they also sang songs about recycling, participated in composting, environmental poetry contests, and learned to associate guilt with their carbon footprint. Sometimes we wondered whether we had registered for a public school or private religious institution.

The kicker came late one October, when we received a notice form the principal requesting that children wear green to school on Veterans Day, where they would honor our veterans...with an assembly celebrating recycling and the environment.

We scratched our heads, gathered every red, white and blue article of clothing that they owned, and explained to them that one thing veterans fought for is our freedom from participating in rituals that we don't agree with.

To be clear, I love the earth.

I am in awe of how beautiful it is, and what it has to offer us. I try to teach my children to love the earth. We hike mountains, explore deserts, swim in oceans, and follow the Scout law of leaving no trace when we do.

We also fill our green recycling bin every week, but we do it as a matter of economic preference and not morality, and we don't judge our neighbors if they don't fill their recycling bins, or compete with them to see who has the smallest bag of trash.

And when my friends have a new baby and are feeling overwhelmed, I always bring them dinner, a stack of paper plates and cups, and permission to use them without feeling like they've done something wrong.