In with the Old 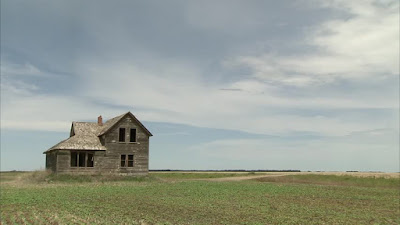 My husband and I both grew up just west of Phoenix, in Glendale Arizona. Our neighborhood was suburban, but if you were to drive about ten minutes north when we were kids there was nothing as far as the eye could see. Nothing but orange groves, cotton fields, and a few old farm houses scattered here and there.

Then about 30 years ago, developers bought up most of the land, built Arrowhead Towne Center - a million square foot shopping mall, and from there it was a domino effect. Arrowhead was followed by a megaplex, strip malls, restaurants, hotels, MLB spring training facility and eventually NFL stadium (go Cardinals!).

But right at the center of all this change, there was a little broken down farmhouse. And somehow, with everything changing around it, this home managed to stay put. I have tried unsuccessfully to find records of the eminent domain battle that must have taken place over that house, but I can only imagine.

Because literally, on one side of the avenue was the mall, south of it a movie theater, then on the corner of the intersection was a brand new shopping center with a Jack in the Box. And in the PARKING LOT of that Jack in the Box sat this house. With people living in it.

I used to sit in a line of cars at that drive through and scratch my head wondering how on earth the house remained. At some point in my adolescence, while waiting for my tacos, a thought occurred to me. That house taught me a lesson that I'm now trying to teach my children.

At the time it was built, it blended in with its environment. It looked like it belonged. But as everything around it changed, it began to look more and more distinct. Conspicuous. Odd even.

There have been occasions in every phase of my life that I have felt distinct, conspicuous, and even odd because I believed or acted in a way contrary to what was popular. Having survived high school, I can look back now and be grateful I held my ground, and credit parents who taught me that when deciding what to do, one thing I didn't need to take into consideration was what everyone else was doing.

I want my kids to be confident, comfortable farmhouses. The moral compass of society is changing at a rapid pace, and as the definition of right and wrong evolves I hope they will be more concerned with standing the ground of their principles than with trying to blend with their environment.

When they were babies and we lived in Santa Barbara, I was fortunate to be surrounded by mothers much wiser and more experienced than I. There was one in particular, Leslie, who has raised her children into five confident, accomplished adults. I remember when they were in high school, she would have them repeat, over and over and over, "It's okay to be different, if different is good."

The Jack in the Box farmhouse is no longer there. I wish it was, and that I could go back and knock on the door. I would ask its residents why they held out for decades. What was it about the house that was so dear to them, that they insisted on staying put? How did they withstand the pressure of developers for so long, and how did it feel to see the surrounding landscape change so drastically? I'm certain they would have something to teach me.

I would love to visit the old Jack in the Box itself while I was at it, but it's also gone. It too was demolished, and replaced with an In-N-Out, appropriately. Out with the old. In with...

I'd like to go back there anyway and buy my kids hamburgers.  Through the window we can look at the corner of the parking lot where the house used to sit, holding its ground. And hopefully, between dipping fries I can help them understand the difference between things that should evolve throughout their life, and things that never will. Truth. Principles. Right. Wrong.

Although as much as I enjoy an In-N-Out burger, nothing compares to the Jack in the Box tacos of my youth. Am I right? It's an inconvenient truth, but no one has been able to convince me otherwise.