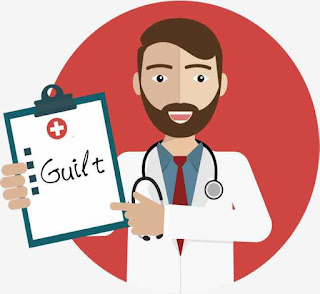 When my daughter Leah was in first grade, she was prescribed a patch to correct the vision in her left eye. 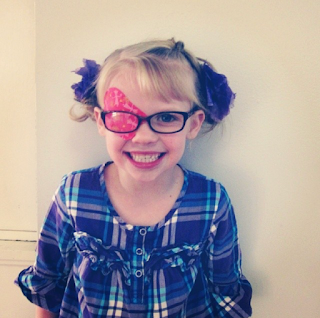 The first time I put it on her, I told her two things.

First, I promised that if anyone made fun of her for wearing it, I would personally come to the playground and watch them "accidentally" trip and land on their face.  She was horrified, but I swear I meant it.

Then, I told her that I was so, so sorry.

Leah has a neurological disorder. I could write an entire book about her, and someday might, but for now suffice to say that she is the most adorable thing you'll ever meet, but that life has handed her a multitude of hurdles to clear.

Her deficiencies manifested one by one from time she was born. It took years to diagnose her, and just as long for me to obsess over where I had gone wrong. First, I decided it must have been mercury exposure from the tuna I ate when I was pregnant with her.  When that theory didn't pan out, I decided it was the medication I took for morning sickness. Or the helmet therapy we elected to correct her skull shape.  Maybe exposure to mold in our California apartment? For every moment I watched her struggle, I found new ways to incriminate myself.

Then, when she was in first grade, we added vision to her list of battles. Her pediatrician noticed her straining to read the eye chart and suggested we have her evaluated, so I scheduled an appointment with a pediatric ophthalmologist at Children's National Medical Center.  This is where she was diagnosed with amblyopia, a condition where the brain favors one eye over the other, and prescribed a patch as treatment.

I had never heard of amblyopia and had a thousand questions, none of which the doctor had much patience for. He spoke mostly over my head except for one thing he made very clear. "You shouldn't have waited until she was seven years old to bring her in," he told me. "If you hadn't, this could have all been avoided."

Then he handed us a box of patches, told us to come back in six weeks, and left the room.

I hated that doctor, whom I would thenceforth refer to as "Dr. Shame," and Leah hated those patches. They gave her headaches. They hurt to peel off. Kids stared at her when she wore them. And it was all my fault. If I had brought her in at an earlier age, like he said, like a good mother, it could have all been avoided.

It weighed on my conscious for years. With every patch, pair of glasses and ophthalmologist appointment, Dr. Shame's admonition echoed in my head.

Until, one evening, I went to dinner with my cousin.

Her challenges are far more consuming than mine. Thirteen years earlier she received a misdiagnosis during pregnancy, and as a result has a child with a serious disability. His diagnosis was followed by years of whys, what-ifs, medical record procurement and malpractice attorneys. She said she became obsessed with receiving justice for her son until one day, after another legal dead end, a nurse at the malpractice firm told her that in her opinion, what had happened "can only be classified as a fluke."

That was the turning point for her. After all the confusion of consultations, files, x-rays, lawyers, etc., she said the only thing she knew for sure was that her son was not a fluke. No child is a fluke.  He is exactly the person he is supposed to be, and even with all of his challenges she wouldn't trade him for anything. She said she hung up the phone, dropped the case, and made the decision that from that moment on she would transfer all the energy she had exerted seeking justice for her son, into loving and enjoying him exactly the way he is.

This was a turning point for me too.

I wondered, what if Leah is exactly the way she's supposed to be? What if the eye patch, the amblyopia, and the learning disabilities are all perfect components of the life she was meant to live? And subsequently, what if none of it could have been prevented or changed, no matter how much tuna I ate when I was pregnant, or what age I took her to the ophthalmologist?

When I considered it from this perspective, I could say without reservation that I wouldn't have Leah any other way. She tests my faith and patience, but is the very reason I've been able to develop both. She thwarted my plan to be a perfect mother, but instead allowed me to raise a perfect child. She's naive but innocent. She's often ostracized, but is incapable of excluding others. It takes her longer than most to understand things, but when she does the joy is tenfold.

My opportunity as her mother isn't just to tolerate her challenges, but to embrace, learn from, and celebrate them.

I am the luckiest.

I suppose I can even celebrate Dr. Shame. Depending on how I reflect on his comment, it can either be a prescription for resentment or healing, and I choose the latter. At the end of the day it's all patchwork isn't it? I'm grateful for what he helped me see more clearly.