.
This week the movie Bucket List is released on DVD. 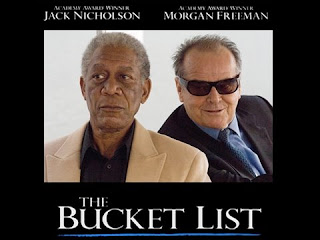 I haven't seen Bucket List, but this got me thinking...What do I want to accomplish before I die?

I must be living a pretty satisfying life, because I swear I scoured the recesses of my ambitions and was only able to come up with four unchecked items. They are, in no particular order:
.
#1 Tour a post office. I'm talking back room, ALL access. (How does my mail GET there???)
#2 Be on a game show. Since $10,000 Pyramid was canceled (moment of silence), I will settle for any game show. Ideally, I would be the first grownup to appear on Kids Week Jeopardy. Admit it - There's nothing better than tuning in to Jeopardy, and realizing it's Kids Week. I can buzz in circles around those little geeks.
#3 Travel to Atlanta, Georgia for the Gone With The Wind tour. I want a costumed guide. I want civil war reenactments. I want to learn how to make a green velvet dress out of curtains.
#4 Become a novelist, preferably a New York Times bestselling one. I have yet to work out the details of my plot but oh my gosh, you will not be able to put it down.
Anyway. Here's to having dreams.
at June 09, 2008